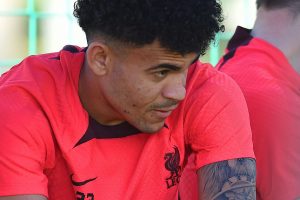 Liverpool star Luis Diaz has suffered a setback with his knee injury during their warm weather training camp in Dubai.

Diaz, 25, had been out of action in the lead up to the World Cup break after sustaining a knee problem in the Reds' 3-2 Premier League defeat at Arsenal on October 9.

He was set to return to competitive action when the domestic season resumes later this month – but that's now in doubt. Diaz has returned to Merseyside to undergo tests after missing training in Dubai, according to The Telegraph.

Liverpool were originally confident the Colombia winger didn't require surgery, but fears are creeping in after he complained of discomfort in the same knee this week.

Boss Jurgen Klopp told Liverpoolfc.com: "It’s all good [fitness-wise] with the boys who are here. What’s not good is we have to see with Lucho.

"He felt something and we need to have further assessment there, but apart from that they all look really, really good."

How big of a blow is Diaz's setback for Liverpool? Let us know in the comments section below

Liverpool have flown out to the Middle East as they step up their mid-season preparations. They're set to play friendlies against Lyon and AC Milan in a mini-tournament called the Dubai Super Cup, which also features Prem rivals Arsenal.

Klopp has been boosted by the return of midfielder Naby Keita, but Diaz's setback is an added blow after fellow attacker Diogo Jota was ruled out until the New Year with his rehabilitation from a thigh injury continuing longer than expected.