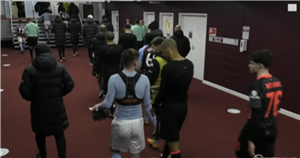 Aston Villa prospect Louie Barry was told off for giving away his debut shirt on Friday.

The 17-year-old, who was part the valiant young Villa team who slipped to FA Cup defeat against Liverpool, gave away his shirt in excitement following an exchange with Fabinho.

The England youth international was then reminded by a staff member that he might want to keep hold of his top due to the occasion, after which he ran down the tunnel.

The Brazilian was more than happy to swap back, before kindly allowing Barry to keep both.

When asked about the swap, he said: "Yeah nearly but I remembered it was my debut shirt.

“Credit to Fabinho I got the shirt as well. Got both of them."

Before adding of his finely taken goal: "I knew I had it when I saw it… the ball in the back of the net is proudest I've been. Family screaming at the TV.

“I was just happy to score – hope I score many more.

"I was working very hard. When I celebrated everything came out of me. Relief. It was quite good.

"I've never been so proud of a team – from start to finish we gave it our all. Credit to ourselves and the club.

"I was cramping up a bit towards the end. You have to get used to it. With age comes physicality and good mentality."

Villa boss for the day Mark Delaney said of the forward: “We know Louie Barry is a goal scorer and he took it ever so well. We see it every day.

“To do it on this stage against a quality team, he showed real composure.

"We are a very young group in the 23s. We do concede early goals sometimes. We showed a togetherness."