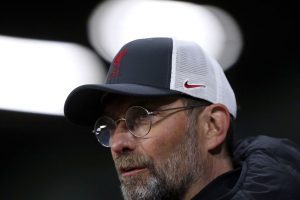 Liverpool could see their reign as Premier League champions officially come to an end on Sunday, but they will be desperately hoping to see that happen.

A Reds win over their old rivals Manchester United will be seen as a huge victory in their quest for a top four place, but it will also crown Manchester City as this season's title winners.

City beat Crystal Palace 2-0 on Saturday to move to the cusp of regaining a trophy they last won in 2019 at the end of an epic battle with Liverpool, who ran away with it last season.

This time around it has been a much more difficult season for the Reds of course, with an expected title challenge melting away and eventually becoming a battle to gain a top four place and secure a place in the Champions League next season. That quest has suffered a blow in the last two matches when the concession of late equalisers against both Leeds and Newcastle saw Liverpool turn six points into two as they lost valuable ground.

The Reds were without centre-back Nat Phillips for both of those matches, and the Bolton-born defender looks like missing out again at Old Trafford after he failed to return to training.

Fabinho is again likely to revert to centre-back alongside Ozan Kabak, with Gini Wijnaldum, Thiago and James Milner operating in midfield, with Milner coming in to provide a bit of extra solidity.

Should he start then Jurgen Klopp would have to leave out one of his forwards, with Roberto Firmino seemingly the most likely to miss out.