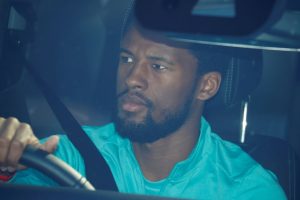 The 30-year-old Dutchman has been a hugely important part of Jurgen Klopp's side since he signed from Newcastle in 2016.

But Wijnaldum's future has been the subject of a huge amount of speculation recently, with his contract set to expire in June.

Barcelona were believed to be the front-runners for his signature last summer, but in the end nothing materialised.

However, according to French outlet Le Parisien PSG are very interested indeed in potentially snapping the player up on a free transfer at the end of the season.

And FC Inter News also claim that the Serie A giants are monitoring Wijnaldum's situation, with his chances of signing a contract extension and staying at Anfield seemingly fading.

It has been reported that despite numerous attempts to reach an agreement, Liverpool and Wijnaldum's representatives have been unable to compromise over the terms of a new deal.

And the player is believed to have always had his heart set on a move to Barcelona, which could play a part in his thinking.

Speaking about the negotiations to Sky Sports last month, Wijnaldum said: "There is no update yet. I also think I’m not the one who should give the update.

"The club should do that. So if there is an update, the club will give it."

Wijnaldum has again been a regular in Klopp's starting 11 so far this season, making 23 starts in the Premier League.

And he would no doubt be a big loss if he is, indeed, to move on to pastures new.

But he would be remembered fondly by Liverpool fans thanks to his crucial contributions in helping the side win the Champions League in 2019 and the Premier League the following year.