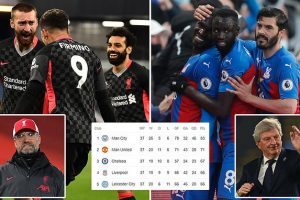 Liverpool vs Crystal Palace LIVE: Can Jurgen Klopp’s side secure Champions League football in Roy Hodgson’s final match as Eagles boss? Follow all the action from Anfield on the FINAL day of the Premier League season

Liverpool are looking to finish in the top-four as they host Crystal Palace on the final day, with fans returning to Anfield for the season’s finale.

Jurgen Klopp’s side have won their last four Premier League games and now a top-four spot is in their hands – a win against Palace should secure the position, barring Leicester dish out a thrashing against Tottenham.

Chelsea also need to win against Aston Villa to secure Champions League football, while Roy Hodgson is managing Palace for the final time against one of his former sides.

Sportsmail’s KIERAN JACKSON will provide live coverage of Liverpool vs Crystal Palace, including all the build-up, team news and in-game updates.

So, here it is folks – the final day of this most unusual Premier League season!

Liverpool need to win to all-but guarantee a top-four finish, with their goal difference four goals superior to that of Leicester, who face Tottenham.

Any slip up though, and the Foxes can pounce, with Chelsea – a point ahead – also needing to win at Aston Villa.

We’ll be following all the action from Anfield here – team-news is coming up at 3:00!