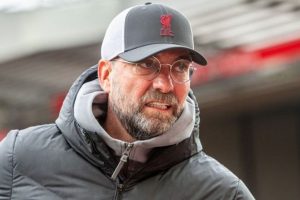 Liverpool target Renato Sanches shows off skills on the pitch

Former Arsenal and Everton striker Kevin Campbell has urged Liverpool to make a decisive move for Portugal midfielder Renato Sanches. The Reds are still without a replacement for Gini Wijnaldum who left the club to join PSG earlier in the summer.

Only last week, Portuguese journalist Pedro Almeida reported that a deal between Liverpool and Sanches was ‘almost done’.

However, with his national team dumped out of Euro 2020 at the hands of Belgium, the move does not seem to have materialised as yet.

Campbell is the latest onlooker to suggest that Jurgen Klopp would be wise to invest in the powerful midfielder, telling Football Insider: “The young man deserves a huge amount of credit for the way he has bounced back.

“It feels like he has been around for a decade but he is only 23. It is incredible.

“He has had to reinvent himself a bit but he is a fantastic player. He is strong, powerful and is a great ball carrier.

“I think would add a different dynamic to that Liverpool midfield. Someone who can power past people.

“Players bounce off him when he is in the midfield. Wijnaldum was a bit different. He was good on the ball, would move it quickly and come up with the occasional goal.

“A powerhouse like Sanches could make Liverpool title challengers again.”

Indeed, Sanches was mightily impressive at the Euros and managed to worm his way into a hugely competitive starting line-up at the expense of Bruno Fernandes.

He won Ligue 1 last season with Lille, defying all the odds to pip mega-rich PSG to the post.

It has been a fantastic career comeback for the 2016 Golden Boy winner, after an unsuccessful loan spell with Swansea in 2017-18 looked to have severely dented his confidence.

Several years on, his performances are once again attracting some of the biggest clubs on the continent.

A potential £30million deal would make sense in many ways, representing good value for the player while Lille are in need of transfer funds to balance the books.

Liverpool are sure to have their hands full in their pursuit, however, with Arsenal also sniffing around for an all-action midfielder of Sanches’ calibre.

Although it did not work out the first time in the Premier League for the 23-year-old, on current form he looks as though he could be a real asset for a title-challenging side.