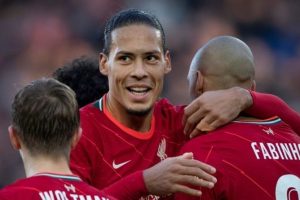 Virgil van Dijk made a surprise visit to the Shrewsbury dressing room after Liverpool’s 4-1 thrashing of the League One side to congratulate Steve Cotterill’s side on their performance. The Reds cruised into the FA Cup fourth-round at Anfield although it wasn’t always plain sailing after they went 1-0 down.

However, goals from Kaide Gordon, Fabinho (2) and Roberto Firmino secured Liverpool’s place in the hat.

Jurgen Klopp’s side will now host Cardiff at Anfield as they look to move one step closer to Wembley.

While Shrewsbury may have been dumped out of the competition, it was another day to make the club’s supporters proud.

Liverpool’s quality saw them prevail though and after the match, Shrewsbury boss Cotterill revealed his players were touched by the class of Van Dijk, who made his way to the away dressing room off his own accord.

“Virgil came into our dressing room and congratulated everyone and brought his shirt in,” Cotterill said.

“Not only is he a top player – he is a gentleman and it was a very good experience for our players today.”

Van Dijk was a surprise start for the Reds – who named a youthful starting XI due to a number of notable absentees.

The Dutchman captained the hosts while Andy Robertson and Ibrahima Konate also started at the back.

“I am delighted but I know they can do so much better because they are such huge talents,” Klopp said.

“The first goal was their goal. So many nice little stories today.”

Klopp also confirmed that Trent Alexander-Arnold was missing with COVID-19 after returning a positive test after the 2-2 draw at Chelsea.

The right-back is now expected to return to the fold in due course.

Brentford then travel to Merseyside next Sunday in Premier League action.