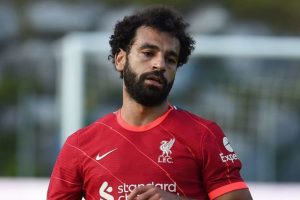 Mohamed Salah has been one of, if not the best player in the Premier League during his time at Anfield as a Liverpool player.

The Egyptian has helped inspire the Reds to not only their sixth Champions League title, but also their first league title in three decades.

However, Salah’s time in Merseyside could be nearing its end if recent reports over the forward’s future are to be believed.

The 29-year-old is reaching an age that means he is likely to have seen his best playing days already and Liverpool could build for the future with funds generated from his move.

According to The Football Terrace podcast, Salah’s departure is edging ever closer as the two-time Premier League golden boot winner harbours aspirations of playing abroad.

Dean Jones of the podcast claimed: “It makes sense for them to cash in on Mo Salah, just as he is passing his peak and re-investing that money in someone you can get five, six or seven years of.

“Mo Salah is just extremely ambitious and while he has loved being at Liverpool he doesn’t see this as being the end of his journey.

“That’s why he has started to give interviews in the last 12 months hinting at the next step for him. It’s not out of disrespect, it’s purely led by the fact that he wants to be recognised as being in the bracket of top tier players.”

The mention of Salah’s name in the discussion surrounding European football’s most elite marksmen has waned, despite the fact he was Liverpool’s top scorer again last season.

The striker is thought to be keen on being held in the same bracket as the likes of Harry Kane and Erling Haaland.

Jones went on to claim Salah would have to identify what outfit would prove to be the best move to earn that kind of respect and acclaim, before naming two sides who the Egyptian is thought to be keen on joining at some stage in his career.

“He’s got to figure out at what club he would get that at, I think ideally he saw that at somewhere like Barcelona or Real Madrid, but it is unclear whether those avenues will open up because of the financial situations at both of those clubs.”

He also revealed that Salah will factor in the impact any move could have on not just his status but the status of Egyptian football.

“He’s doing this for not just himself, but for his country, he wants his profile to be reflected in his country’s profile.

Talk of a potential departure for Salah is a disastrous way to gear up for up for the 2021/22 season where Jurgen Klopp will be looking to bounce back from their dismal attempt at retaining their crown last term.

Liverpool did well to finish third after at one point falling as low as ninth, mainly due to a remarkable injury crisis which ruled three first choice central defenders out of action.