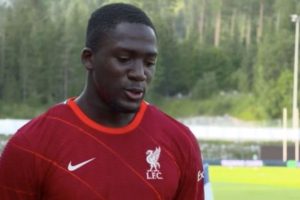 Ibrahima Konate’s post-match interviews may just be a new guilty pleasure for Liverpool fans around the world. The emotive Frenchman was full of character as he flexed his English after the 1-1 draw with Stuttgart in Austria.

The £34million signing from RB Leipzig turned in a confident display on his first appearance in new colours, marshalling Liverpool’s defence in the absence of Virgil van Dijk, Joe Gomez and Joel Matip.

It was not the best start though for Konate who was dragged wide by his marker Sasa Kalajdzic, who teed up the opener for Stuttgart with a back heel.

He responded well though and bossed the opposition attack every time a long ball was launched over the top.

Liverpool had to settle for a draw after Sadio Mane’s equaliser and the result slightly spoilt Konate’s “unforgettable moment” making his debut.

“Just a little bit sad, very sad that we didn’t win but I am still also happy.

“I was very happy with this team on the pitch. There was good communication with everybody.

“Step by step it will be better, it’s the first game in pre-season and we are ready for the next game.”

Liverpool return to action on Friday when they face Jurgen Klopp’s old side Mainz and it will be a chance to play in front of supporters once again.

“Yes of course, this is the best [playing with supporters].

“The Covid situation was very bad for everyone in the world, it’s very sad to play without your fans.

“Now I think it will be a new level with the fans because the fans were sad not to be here with us.”

Konate could prove pivotal for his side as they look to come back firing in the Premier League.

Van Dijk and Gomez are still not ready to return to full action, meaning the Reds will have to be patient with the defensive duo.

Meanwhile, Matip played in Liverpool’s other match today as they were held to a 1-1 draw with FC Wacker Innsbruck.

Nat Phillips did not feature but was present at the stadium.

Reports are insistent his absence was not related to speculation linking him with a move to Brighton.