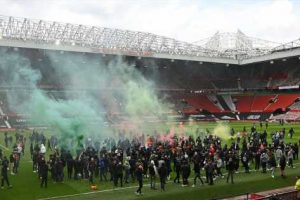 Manchester United were brought to their knees following an afternoon of unprecedented chaos and carnage at Old Trafford.

Had United's owners the Glazers bothered to turn on the news back in Florida, the images before them will have left the brothers grim falling off their sun beds.

Footage of fuming fans storming the Old Trafford stadium, smashing down barriers and gates to get inside and onto the pitch.

While ground staff prepared the surface for the visit of Liverpool, several hundred invaded the hallowed turf, swung on the crossbars, seized the corner flags and even stole one of the match balls in order to organise an impromptu penalty shoot out amongst themselves.

One United fan picked up a pitch side camera and hurled it towards the grass, while another threw a flare into the stand.

Those officers circling the area for several hours in a police helicopter must have had quite a view of scenes we never thought we'd see.

Some fans even tried to break into the dressing rooms, forcing the Liverpool kit men to lock themselves in the visiting one while Premier League match officials sought sanctuary elsewhere.

For more than 12 months we've been wanting supporters back inside stadiums – but not like this.

Outside the ground, several thousand had gathered to protest at the Glazers' ownership and clashed with police as club stewards looked on helpless.

Meanwhile, outside the United team's Lowry Hotel base, large groups of fans congregated to make their feelings clear.

Ole Gunnar Solskjaer and his players were left trapped inside, staring out of their bedroom windows at the scenes below, unwilling to travel to the stadium due to safety fears due to the fact the stadium's Red Zone had been heavily contaminated.

Jurgen Klopp and his Liverpool players were also holed up in their own hotel, the Hyatt, waiting for the news we all knew was coming.

Almost an hour after the scheduled kick off time of 4.30pm, the biggest fixture in English football was officially postponed due to concerns about the safety of players, officials and all the rest involved in staging the clash.

Having orchestrated the protest on mobiles from different parts of the city, United fans had come, seen and conquered after more than achieving their initial goal of having the match delayed.

But how was it allowed to spiral so out of control, when United bosses had advanced warning the protest was taking place?

What impact will it have on the end of the season, the chances of supporters being allowed to return to all games in the wake of the pandemic – and will it set a precedent that could now see other groups of fans do the same thing, as football faces a growing revolution?

United supporters have spent 16 years building their anger towards the Glazers – and the club's role in the doomed European Super League proposal simply lit the blue touch paper.

A fire is now burning underneath the sport and in the red half of Manchester yesterday the flames got out of control.

But the most worrying thing of all is that there appears to be no-one within football capable of putting it out.