Liverpool have two undroppables who can edge Man City, Man Utd and Chelsea battle for Reds 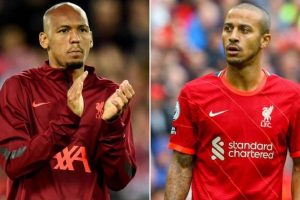 Liverpool’s win over Leeds United on Sunday was understandably overshadowed by the injury to Harvey Elliott who has been as fine a performer as any player – Mohamed Salah included – for the club this season. The exciting teenager had enjoyed a sensational start to the season and looked primed to become a major part of Jurgen Klopp’s plans for the rest of the campaign.

Those plans are of course now in ruins, with Elliott’s dislocated ankle surely set to keep him on the sidelines until well into 2022. He is set to undergo surgery today (Tuesday) on the injury.

But while the prodigious 18-year-old’s absence is a wretched blow, Liverpool’s brilliant victory at Leeds showcased that Klopp has another two undroppables in midfield who should help ensure whoever comes into the team in Elliott’s place is primed to succeed.

Fabinho and Thiago Alcantara were the two main stand-outs of the Merseyside club’s 3-0 triumph at Elland Road, despite Salah scoring his 100th Premier League goal, with the holding midfielder even getting himself on the scoresheet.

Liverpool now boast nine wins from 10 games when the pair have started next to one another in midfield, with the only match they failed to win coming in the 2-2 draw against Everton at Goodison Park last year.

That match – another famous for a long-term injury, that time to Virgil van Dijk – saw a stoppage-time Jordan Henderson goal ruled out for the most marginal of offside calls on Sadio Mane. The same goal this season, with revamped VAR rulings, would stand.

Otherwise, the club’s record is imperious when they have the midfield duo, who are both genuinely world-class players, operating in the middle. It was key to them salvaging last season by finishing third to qualify for the Champions League.

With Fabinho the man tasked to break up play and provide security for the Liverpool back-line, Thiago is the tempo-setter on the ball. That is of course not all they provide given in possession Fabinho is also capable of a phenomenal pinpoint pass and out of possession Thiago wins the ball back brilliantly himself.

But those are their two core strengths, and the pair go well together in the engine room for this Liverpool team. There are arguably no other midfielders in world football who could better operate in the specific roles of Fabinho and Thiago under Klopp.

With the Brazilian and Spaniard as lynchpins of the midfield, Liverpool will win a big percentage of their league matches. That’s whether it is Jordan Henderson, Alex Oxlade-Chamberlain, Curtis Jones, James Milner or Naby Keita who play next to them to complete the midfield trio.

Of course, it is another challenge altogether for Liverpool that they must keep Fabinho and Thiago – prone to injuries in recent seasons – fit to play 30-plus Premier League matches alongside one another. But if they do, they should be very confident of a serious tilt at the title again this term.

If they can have the pair for almost all 38 league games, Klopp will fancy his Liverpool team’s prospects of ending as champions once more. They are a team that with proper momentum can win 14 or 15 games consecutively and rack up 90-plus points, as they have proven twice.

Their chances of doing so with Fabinho and Thiago in the team are much higher, especially given the ever-improving chemistry of their partnership.

Liverpool’s win over Leeds proved that at full strength Klopp’s charges remain a truly formidable outfit. Leeds were far from their best but no ‘big six’ club took more than a point away from the Yorkshire side at their own stadium last term, including champions Manchester City.

It is City, Chelsea, Manchester United and Liverpool predictably setting the pace early on this season, with the latter three all on 10 points and a plus-eight goal difference. City, having tasted defeat, are one point behind the rest.

Of course there are holes in the Liverpool squad and Elliott’s injury means when the Africa Cup of Nations rolls around, Klopp has weaker options to pick from in the front three in particular. Diogo Jota, Roberto Firmino, Takumi Minamino and the outcasted Divock Origi will be their four main forwards, provided they’re all fit. The left-footed Elliott would most definitely have been pegged for minutes over Salah in his favoured right-wing role.

Klopp will have to work out how he combats that problem. But if he has Fabinho and Thiago behind the forward line, and also further back Virgil van Dijk alongside either Joel Matip or even Joe Gomez or Ibrahima Konate behind them, they have equal amounts of steel, strength, poise, precision and sublime footballing intelligence through the middle of the pitch.

If they’re fit, Fabinho and Thiago are undroppable. And if they can avoid long-term injuries, Klopp’s side won’t drop many points either. In fact might just be the duo most important to Liverpool’s hopes of a 20th top-flight triumph to draw level with rivals United.