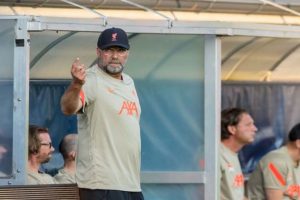 Gini Wijnaldum’s exit from Liverpool was hardly a shock for supporters as he moved from Anfield on a free transfer to Paris Saint-Germain. But the concern for Liverpool fans is the replacement of a player who became an almost indispensable figure in Jurgen Klopp’s squad.

The Dutch midfielder ended his five-year stay at Anfield this summer, leaving a gaping hole in Klopp’s squad as the Reds aim to challenge for the Premier League title again next season.

Some reports claimed Wijnaldum left Merseyside for the French capital for financial reasons but that notion was strongly rejected by the 30-year-old.

Wijnaldum believed he did not get the external credit he deserved at Anfield.

“Liverpool meant so much to me. There was some moment when I didn’t feel love and appreciated there,” he told the Times.

“Not by my teammates, not the people at Melwood. I know they all loved me and I loved them. It was not from that side, more from the other side.

JUST IN: Liverpool ‘frontrunners to beat Man Utd and Chelsea’ to wonderkid

“There was a moment when I didn’t feel loved. In the last two seasons, I had it a few times.

“The media didn’t help. There was a story like I didn’t accept the [Liverpool] offer because I wanted more money, and the fans made it like ‘OK, he didn’t get the offer so he doesn’t try his best to win games.’ Everything looked like it was against me.”

Wijnaldum featured in every single Premier League fixture for the Reds and his presence in both boxes will be missed.

The Reds have been quiet after securing the solitary signing of RB Leizpig defender Ibrahima Konate in the early stages of the transfer window.

But they could suffer if they don’t address the glaring lack of depth in midfield.

Saul has been repeatedly linked with a move to Anfield this summer and would prove a welcome addition.

Though Atletico Madrid won La Liga last season, the Spaniard was not at his best and was left watching Euro 2020 from his sofa.

But the 26-year-old’s qualities are undeniable and he has all the assets to succeed in Klopp’s system.

Saul is an effective operator at both ends and could also provide useful left-back cover.

He is reportedly available this summer and Liverpool could do worse than capitalise on a midfielder entering his prime.

Kessie, 24,  is one of the midfielders more recently linked with Liverpool and his name is exciting supporters.

The AC Milan man fits the profile of player Klopp should be targeting and he could be attainable with just a year left on his contract.

He may be best utilised protecting the back four, but his tally of 13 in Serie A last season shows he can have the goalscoring impact Klopp has been missing in midfield.

ESPN claim Liverpool are among a number of clubs keen on Lyon’s Houssem Aouar.

The Ligue 1 club are said to be willing to listen to offers for the talented Frenchman this summer.

Aouar is a long-term target of Klopp but perhaps doesn’t offer the same dynamism Wijnaldum brought on a consistent basis.

But it may be worth taking a risk on the 23-year-old, who possess classy passing and finishing ability.