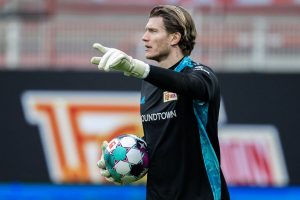 Liverpool goalkeeper Loris Karius expects to depart the Anfield club this summer, rather than returning to see out the final year of his contract.

The German is on loan at Union Berlin back in his home country this season, having previously spent two campaigns in Turkey with Besiktas, who opted against signing him permanently.

Karius has spent most of the 2020/21 campaign on the bench, but has recently come into the line-up at Union after regular first-choice Andreas Luthe was given compassionate leave.

The 27-year-old has played three in a row after making his debut as sub at the end of January, keeping clean sheets in two matches, and he says he can envisage making his stay at Die Eisernen a more long-term one.

“I still have a contract with Liverpool until 2022. But of course I can imagine staying in Berlin if everything fits,” he told Bild.

“I’m not just passing through here. The mentality of the people and the spirit of the team are good for me. I’m basically a down-to-earth guy, even if I drive an expensive car.”

On his own form, the former Mainz stopper said he feels he has given the head coach a decision to make in future, having only conceded once during his stint between the sticks.

“We haven’t lost the last three games and we have worked well as a team, I’m very proud. The coach knows that I’m there. If he needs me, he can rely on me. I can only say that I’m in top shape and I am satisfied with my last performance.

“I don’t know who’s in goal, before time. Our coach Urs Fischer sets up the team. Conceding one goal in three games isn’t a bad rate, so I’m ready and want to help the team.”

Liverpool striker Taiwo Awoniyi is also on loan at Union Berlin and the Nigerian 23-year-old has scored five Bundesliga goals this season. Union are seventh in the table, just outside the Europa League spots.