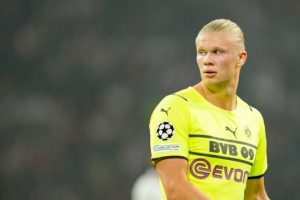 There are not many talents in world football who are in hotter demand than Erling Haaland at the moment, with the Norwegian cementing his status as one of football’s best talents at the age of just 21. And the Borussia Dortmund striker has been told to choose Liverpool over Manchester City should it come down to a two-way battle between the Premier League outfits – as the Reds have an easier system to fit into.

Haaland, who moved to Dortmund from Salzburg just under two years ago, has become one of the world’s most renowned players with his spectacular goalscoring record.

An incredible 70 goals in just 69 games for the German side has put him in the conversation alongside the upper echelon of world strikers when it comes to being the best finisher in Europe.

That kind of form has led to increased rumours of Haaland leaving Dortmund for a new challenge next summer.

He has a reported £68million release clause which has alerted a lot of the world’s richest clubs.

And with Liverpool and City reportedly interested among others, the Norwegian striker has a huge decision to make.

But Rio Ferdinand believes he should choose the Reds ahead of City – with their system much easier to become accustomed to.

“I think he suits other teams better, if I’m Liverpool I’d take him right now,” Ferdinand said on BT Sport.

“I think if he goes to Liverpool that’s a devastating front three.

“I don’t think it’s as hard for him to adapt if he goes to Liverpool, it’s a different system.

“But it’s quite hard to adapt to get into that team. Not many players go there and adapt immediately.”

City’s lack of a striker is yet to have put much of a burden on their season thus far.

But the chances they create would be benefitted by a striker.

Alternatively, Liverpool’s striking force would be complete with Haaland flanked by both Sadio Mane and Mohamed Salah.

And the Norway international would be a mainstay at Anfield for years to come.