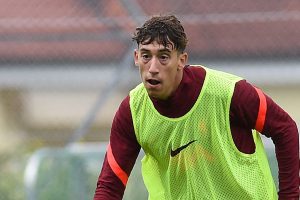 Liverpool may already be willing to cut ties with full-back Kostas Tsimikas just one year after bringing him to Anfield.

The Greek defender, 25, was drafted in as cover for first-choice left-back Andy Robertson last summer in an £11.7million deal from Olympiakos.

But Tsimikas has barely featured for Jurgen Klopp's side, making only seven appearances in all competitions last season – four of which were as a late substitute.

That is not necessarily unusual, given Klopp drip-fed Robertson into action when he joined the club, giving him very little game time in the early stages of his Reds career.

However, it seems Klopp has made his mind up on Tsimikas and is ready to offload him completely.

Talks are said to be underway over a potential transfer with Serie A giants, who enquired over a possible loan deal.

Yet respected journalist Ciro Venerato claims (via CalcioMercato) that Liverpool are only interested in letting Tsimikas go permanently.

Napoli would prefer to sign Chelsea's Emerson Palmieri, but are finding negotiations with the Blues tricky to navigate.

That has led them to consider Tsimikas, but they would likely have to stump up a similar figure to the fee Liverpool paid to prise him from Olympiakos.

Can Tsimikas make the grade at Liverpool? Let us know your thoughts in the comments below.

While Liverpool's stance doesn't bode well for Tsimikas, it could hand an opportunity to youngster Neco Williams, who is pushing for first-team contention.

Williams is back-up to the immovable Trent Alexander-Arnold but can also operate on the left side of defence.

It's unlikely Klopp would let both Tsimikas and Williams go, but with James Milner also able to play in the role, the Reds' boss may view the departure of the Greek international as one which will not have a major impact on his squad.

Moreover, Liverpool have hit an obstacle in their own transfer dealings as Klopp is unable to make any further signings without offloading some of his current crop.

They managed to recoup £12million from the sale of Harry Wilson to Fulham, while Xherdan Shaqiri looks set to move on before the window shuts.

Losing Tsimikas would boost Klopp's transfer kitty and enable him to use the funds raised to launch a bid for another target, with West Ham's Jarrod Bowen and Borussia Monchengladbach star Florian Neuhaus on their radar.