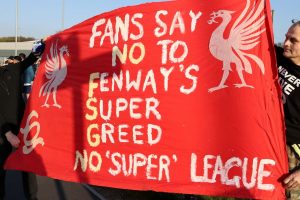 Liverpool are set for urgent talks with Spirit of Shankly after the supporters' group demanded to be represented on the club's board following last week's European Super League debacle.

Along with the rest of the Premier League's so-called 'Big Six', the Reds were forced into an embarrassing climbdown from the controversial breakaway plans, which sparked protests from fans against the club's American owners Fenway Sports Group.

Principal owner John W Henry then apologised to supporters, personally taking the blame for Liverpool's involvement in the proposals.

But anger at the way the club is being run is still rife – and the Reds' CEO has written a letter to Spirit of Shankly agreeing to talks as soon as possible.

The letter was in response to the fans' group calling for a place on the Anfield board – after members voted overwhelmingly for a working relationship between Spirit of Shankly (SOS) and the club.

The supporters' group asked fans to vote on the extent to which it should engage with FSG – which included demanding that the Americans sell up.

Fans were opposed that idea, with 66% voting against – but a whopping 89% voted to demand a place on the board for SOS.

In his letter to SOS, which was shared on Twitter on Tuesday night, chief exec Hogan said: "It is positive that SOS has opted to re-engage with the club as it will allow the necessary conversations to take place, for views to be aired and, hopefully, for workable solutions to be found in keeping with the best interests of the club."

The letter added: “In the spirit of your approach, I will seek to convene an initial meeting as soon as our diaries allow.”

Whether Liverpool will agree to a board representation remains to be seen – but the group could make a list of further demands based on the results of its survey.

The results, published in a statement from SOS earlier this week, were as follows:

In its statement, Spirit of Shankly said: "We must use this experience as a catalyst for change. Real change.

"In voting to continue engagement with FSG, they must now make a decision. They can accept the values and principles of our club and react positively. Together we can lead the change for the future of our game.

"We call for a reconstitution of the board that includes effective, elected and accountable fan representation, and not for members of the current LFC board to be that elected representative. This cannot be token representation, but one that has the ‘golden share’ on the decision-making process."

The statement added: "We must also take the opportunity to work alongside other supporter trusts and the FSA, to ensure the government’s review into football governance includes giving fans a say in how their clubs are run. A true supporters voice at the heart of decision making."

Together with Manchester United, Manchester City, Chelsea, Arsenal and Tottenham, Liverpool are yet to discover whether they will face sanctions for their part in the breakaway bid.

READ MORE: Liverpool now paying more than Man Utd on wages – but are not Premier League's No.1

READ MORE: Liverpool struggles “much more” than a blip and Jurgen Klopp needs to make changes