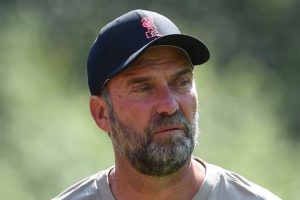 Liverpool have made signing a new midfielder a priority after Jurgen Klopp’s change of heart about his transfer plans this summer. The Reds may rely on sales to fund a move, though, with four stars at the forefront of the shop window.

Klopp currently has quality midfield options available to him, even after Georginio Wijnaldum’s free transfer to Paris Saint-Germain.

Curtis Jones is, too, fighting for a place in Klopp’s first-choice trio after an impressive 20/21 campaign whilst Liverpool suffered mass injuries problems.

Despite his wealth of current options, Klopp is eager to bolster his squad and mount more of a challenge to Manchester City this season.

JUST IN: Liverpool could help Man Utd out in possible transfer chain reaction

Appearing on The Athletic’s YouTube show Ask Ornstein, James Pearce has revealed that Klopp has had a change of heart regarding his transfer plans.

Pearce reports that despite Klopp’s public intention to head into the 2021/22 season without a new midfielder, it is now a priority.

The Liverpool boss was previously happy to enter a new campaign with his current options after Jones has impressed since becoming a full-time first-team player.

Amid Wijnaldum’s summer exit and uncertainty surrounding captain Henderson’s future, the need for reinforcements appears to have grown.

According to Pearce, 24-year-old winger Harry Wilson will leave the club permanently after loan spells at five different clubs.

One of Klopp’s unlikely stars of last season, Nathaniel Phillips, will also be allowed to leave in search of regular minutes.

20-year-old full-back Neco Williams is also on the transfer list, with Trent Alexander-Arnold tipped to return to form this season.

Finally, Xherdan Shaqiri is expected to leave after enjoying a solid Euro 2020 campaign with Switzerland.

Liverpool haven’t been heavily linked with many midfielders so far this summer.

Progression towards acquiring a new star will likely pick up once funds have been generated.

However, with pre-season well underway, Klopp will want his squad settled as soon as possible.

There are just over three weeks left until the 21/22 season commences, so this story may pick up soon.