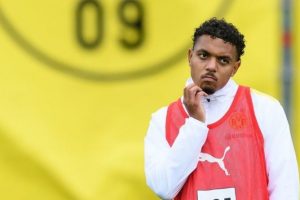 Liverpool held talks over a deal for Donyell Malen but it’s understood the club’s failure to offload Xherdan Shaqiri and Divock Origi stopped them from pressing ahead with the deal. The Dutch forward has now joined Borussia Dortmund for a fee believed to be around £25million.

The 22-year-old hit 19 goals in 32 matches last season for PSV to firmly but his face in the shop window.

While Malen was feature for his country at the European Championships, speculation regarding his future was beginning to intensify.

PSV made it clear the striker could leave and Liverpool entered the running.

The Reds even held talks over a deal for the former Arsenal academy star.

However, speaking during one of his Twitch streams, Fabrizio Romano explained that Malen’s potential move to Liverpool was blocked by both Shaqiri and Origi.

Liverpool are open to offers for both players but interest has been few and far between.

The club were operating with a similar stance a year ago but the financial constraints of the pandemic took its toll on the transfer market.

Dortmund pounced on Liverpool’s hesitance and moved to complete the deal after Jadon Sancho’s £72million move to Manchester United was confirmed.

Jurgen Klopp is looking for attacking reinforcements and could still sign a new forward player.

The German is mindful that he could lose both Sadio Mane and Mohamed Salah next January for the Africa Cup of Nations.

Takumi Minamino could finally be set to kickstart his Liverpool career 18 months after arriving from RB Salzburg.

The Japanese attacker benefitted from some regular playing time in the Premier League while on loan at Southampton for the second half of last season.

Shaqiri could still be heading for the exit door though in the next few weeks.

Lazio are believed to be keen on the Swiss international, who would cost just over £10million.

“I told Liverpool board I feel ready for a new challenge,” he recently told the Italian press.

“They accepted my decision and will now consider bids to sell me. Liverpool won’t stop me this summer. I’d love to come back to Italy, and I’d like to play for Lazio.”

Harvey Elliott could now replace Shaqiri if he departs following a successful stint on loan at Blackburn last season.