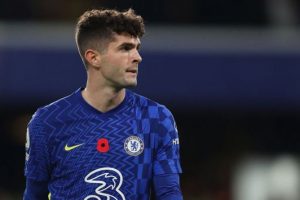 Liverpool could apparently lure Chelsea forward Christian Pulisic to Anfield in January for less than the Blues signed him for three years ago. The USA international is open to a move away from the capital due to limited opportunities under Thomas Tuchel.

Chelsea shelled out £58million to land Pulisic from Borussia Dortmund in January 2019.

The forward had to wait over seven months to make his debut for the west Londoners after initially staying in Germany on loan.

Pulisic has endured a torrid time in England after being hampered by a string of injuries.

During his first season at Stamford Bridge, the American missed two months of the campaign due to an abductor injury.

Last season, he missed a string of encounters after picking up a hamstring injury and has been unavailable for a large part of the current campaign after hurting his ankle while playing for his country in September.

Pulisic was handed his third start of the season on Tuesday night as he led the Chelsea line in the absence of Romelu Lukaku and Kai Havertz during their 4-0 thumping of Juventus.

But he was unable to find the back of the net and was replaced late on by Timo Werner, who did get his name on the scoresheet.

Chelsea have been in scintillating form this season and have an abundance of attacking players at their disposal.

When Tuchel has a fully-fit squad to choose from, Pulisic is unlikely to command a regular starting place and could therefore look to jump ship to get regular minutes for another team.

According to reports in Spain, Chelsea will demand £42m in exchange for Pulisic, who is still only 23 years old and appears to have a bright future at the highest level of the game if he can overcome his injury problems.

Barcelona are apparently interested – but the Catalan giants are in no position to pay out mega-money due to their dismal financial situation.

The Blues are believed to be reluctant to entertain the idea of selling the talented player to a rival Premier League club, but Reds boss Jurgen Klopp could attempt to take him to Anfield.

Pulisic joined Dortmund’s youth set-up when Klopp was in charge at Signal Iduna Park, and the German boss tried to sign him in 2019 before the forward put pen-to-paper on a deal with Chelsea.

Klopp is desperate to evolve Liverpool’s attack, with the influential trio of Roberto Firmino, Sadio Mane and Mohamed Salah no longer his automatic go-to frontline.

The Liverpool manager is set to lose Mane and Salah in the New Year when they represent their countries at the African Cup of Nations so the 54-year-old is in desperate need of reinforcements on Merseyside.

Pulisic appears to be a ready-made Liverpool player thanks to his speed, work-rate and direct style of play.

And Klopp could table a bid lucrative enough to turn the heads of Chelsea chiefs as Liverpool look to rival the Blues for the Premier League title.