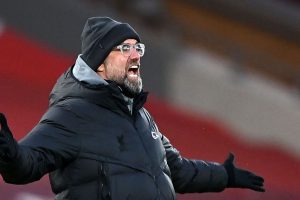 Liverpool look set to be beaten by Bayern Munich to a second defensive target as Jurgen Klopp's defensive frustration continues.

Bayern are closing in Kalidou Koulibaly after reportedly making a £39million bid for the Napoli centre-back, who has long been linked with a move to the Reds.

The blow comes after the Bundesliga giants beat Liverpool to the signing of RB Leipzig star Dayot Upamecano, who last month agreed terms on a move to Germany.

Both players have been on Klopp's radar, with long-term injuries to Virgil van Dijk, Joe Gomez and Joel Matip having exposed the Reds' shortage of defensive options.

The manager was unhappy that Liverpool didn't pull out all the stops to sign Senegal star Koulibaly in the January transfer window, according to FourFourTwo.

And the publication reports that he is set for further frustration as Bayern line up the capture of the 29-year-old.

The European, world and German champions plan to pair Koulibaly with 22-year-old Upamecano, who has agreed a five-year deal at the Allianz Stadium.

It is expected they would forge a formidable defensive partnership as eight-times consecutive Bundesliga kings Bayern look to continue their dominance at home and on the continent.

Klopp was rebuffed when he enquired about a potential move for Upamecano in January, hoping to pay a slight premium to land the France international six months before his £38.5m release clause came into effect.

And his hopes of signing the defender in the summer were dashed when the deal with Bayern was announced last month.

Meanwhile, Liverpool have had to get by with midfielders Fabinho and Jordan Henderson deputising in defence in the midst of the worst injury crisis of Klopp's reign.

Skipper Henderson recently joined the lengthy casualty list as he faces weeks out with a groin injury, while Fabinho has missed the last four games with a muscle injury.

The Reds signed Ben Davies from Preston and Ozan Kabak on loan from Schalke on the final day of the January transfer window in a last-ditch bid to reinforce their depleted defence.

Kabak was partnered by Nat Phillips on Sunday as Liverpool ended a run of four successive Premier league defeats with victory over Sheffield United.

Klopp hopes to have Fabinho back for Thursday's crucial Anfield showdown against Chelsea.