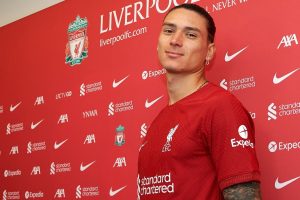 Liverpool star Darwin Nunez has been backed to play second fiddle to Erling Haaland ahead of the new Premier League season by Express Sport readers – with over 65 per cent of voters backing the Manchester City new man to impress more in his first full campaign in England than Nunez. That will not bode well for the Reds given City are already an incredibly strong rival, with the two teams expected to fight for the title again next term.

Haaland’s agreement to sign for City was announced in May, with the club signing him for a fee of £51.1million from Borussia Dortmund. Big things are expected of the Norwegian given that he was on the radar of almost every club in England, and at the age of 21 he isn’t even in his peak yet. His signing is scary for the likes of Liverpool given City amassed 93 points last term without a No 9.

Liverpool have responded with the signing of Nunez, another superb talent who Virgil van Dijk described as ‘one of the best in Europe’. But despite the Uruguayan’s arrival, Express Sport readers have voted in favour of Haaland when asked who will impress more between him and the ex-Benfica star in the new campaign.

Over 10,500 results were recorded in our recent poll, with Haaland winning 7,100 of the votes. The Uruguayan earned 3,400 votes but Haaland had nearly 70 per cent of the total votes. Nunez too is expected to be a success after signing for an initial £64m, and he will be expected to lead the line alongside Luis Diaz and Mohamed Salah.

However readers have still voted heavily in favour of the former Dortmund frontman Haaland. Nunez has admitted he wished to move to Anfield thanks to Liverpool’s trophy-winning record and their recent successes under Jurgen Klopp.

“When I arrived at the training ground, I was really surprised to see the set-up and the structure and all the trophies here,” Nunez said. “You can then imagine yourself winning more trophies and then later on when you come here again and see the trophies on display, you can say, ‘Look, I was a part of that, I was there at that time, winning trophies.’

“That’s one of the reasons why I came here to Liverpool – to win trophies and titles. I want to win a lot of trophies at Liverpool.”

Liverpool won the domestic cup double last season, and ran City close in the Premier League title race. But for a late comeback by the Citizens against Aston Villa on the final day which saw them win the league, the Reds would have taken the domestic treble.

And they had a chance to claim a treble of trophies regardless a week later in the Champions League final, although they fell 1-0 to a resolute Real Madrid side. They will hope Nunez can help them get revenge on City in 2022-23 despite the capture of Haaland.