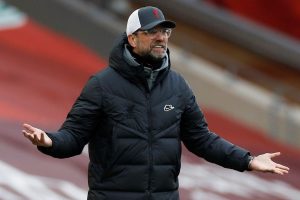 Liverpool may be forced to shell out a massive fee to replace Georginio Wijnaldum this summer after missing out on a readymade replacement because of concerns over the player's height.

The Reds look set to lose Wijnaldum for nothing when his contract runs out, with Barcelona mooted as the Dutchman's preferred destination.

Jurgen Klopp knows he'll have to recruit a replacement for the 30-year-old – but his job might have been a lot easier had the Reds pursued their interest in Celta Vigo's Renato Tapia.

Tapia has been turning heads in La Liga this season, making 28 appearances an earning favourable comparisons with Real Madrid's Casemiro.

Peruvian-born Tapia had trials with Liverpool and Spurs when he first arrived in Europe in 2013, with the Reds rejecting the youngster because of his height.

After missing out on a dream move to Anfield, Tapia joined FC Twente before earning a move to Feyenoord in 2016. He joined current club Celta Vigo in 2020.

Tapia has shone in La Liga this season to leave Reds fans wondering what might have been had their medics got their measurements correct all those years ago.

The midfielder, who also has 55 caps for Peru and featured at the 2018 World Cup in Russia, confirmed the story in an interview with Peru's official website in 2013.

He said: "It didn't happen because of the issue of height. “They did the analysis of my hand and they told me that it would only grow up to 1.80 meters. That was the point."

READ MORE: Ryanair leave Liverpool fan savaged on Twitter after he asked about flights to Istanbul