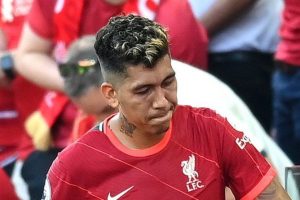 Roberto Firmino has been the glue binding the Liverpool frontline for the last four seasons – even the strongest, super mighty glue can wear off. The Brazilian was forced off in Liverpool’s 1-1 draw at home to ten-man Chelsea. Jurgen Klopp’s side have demonstrated they have the firepower to score at will, but when confronted with a team willing to sacrifice the ball to protect a result, they can be blunt.

This is exactly what happened against Thomas Tuchel’s side.

The Blues were bursting with confidence up until Reece James was sent off for handballing Jota’s shot on the goal line.

After Mohamed Salah stroked the resultant penalty past Edouard Mendy, Chelsea realised which way the wind was blowing.

They knew beating The Reds with ten men, in front of a full, bouncing Anfield crowd was the next level past Mission Impossible.

Thiago Silva and Mateo Kovacic were brought on for Kai Havertz and the injured N’Golo Kante, and a wall of Blue shirts was erected to frustrate the Reds in their own back yard.

Chelsea blocked, tackled, cleared, fouled, and stopped Liverpool to the point The Reds turned blue themselves.

Klopp tried to unpick Tuchel’s master lock with the needle threader midfielder Thiago Alcantara, but even the mercurial Spaniard could not see sunlight through the solid Blues defence.

While a draw against the reigning Champions League holders is nothing to be ashamed off, and the result was more down to Chelsea’s excellence than Liverpool’s bluntness, it could be a huge moment in the title race.

But the lack of a Plan B is a huge problem. Jota, Sadio Mane, and Salah are all top-class players, but they are at their most dangerous when running through the lines and beyond defenders.

Jota scored a sensational header in the victory against Burnley but was he to be expected to do that against Silva, Antonio Rudiger, Andreas Christensen, and Cesar Azpilicueta?

Liverpool were crying out for a natural striker against the Blues. A Fernando Torres, a Luis Suarez, perhaps even a Peter Crouch.

And the only available top-class striker in world football who combines the instincts and qualities of all three, aside from Crouch’s height, is Robert Lewandowski.

After seven Bundesliga titles, a Champions League triumph and a World Club Cup, the Polish hitman announced his desire to leave Bayern Munich for a new challenge.

He became one of the most feared strikers under Klopp, and he would bring a hunger and a winning mentality needed to drive this team over the edge.

Bayern would likely command a fee of around £100m, but even if the Reds were to pull this off, they still would not have spent more than most of their rivals.

Chelsea and Manchester United have already laid down the gauntlet with the signings of Romelu Lukaku and Cristiano Ronaldo, while reigning champions Manchester City upgraded with Jack Grealish for £100m.

Tottenham Hotspur, yes, they are a genuine rival as the only Premier League side with a 100% record, were able to hold on to Harry Kane.

With many of the footballing world reserved to him departing Spurs, the fact they were able to hold on to him is like a new signing itself.

Liverpool have lost one of their key men to injury in Firmino.

They only have Diogo Jota, Takumi Minamino and Alex Oxlade-Chamberlain to call on. Klopp has managed to turn water into Champions League and Premier League titles.

Lukaku to Chelsea, Ronaldo to Manchester United, this has been a transfer window of reunions – maybe it’s time Liverpool take a page out of both club’s books and reunite Lewandowski with Klopp.