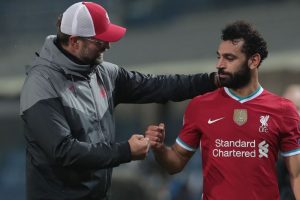 Liverpool face Real Madrid in the Champions League in the Spanish capital on Tuesday, but the fight for a place in the semifinals might not be the only battle to be won.

Jurgen Klopp is prepared to accept the noise surrounding Mohamed Salah’s future at Liverpool while the Egyptian forward continues to perform at the level he has maintained throughout his four years at Anfield.

But speculation linking the 28-year-old with a move to Spain has once again resurfaced, in tandem with the player speaking to the Spanish media last week.

Sources have told ESPN that, rather being irritated by Salah’s readiness to discuss the prospect of a move away from Anfield, Klopp is relaxed about the situation and unfazed by the focus on one of his star players. The dire financial situation at La Liga’s two biggest clubs, meaning they would struggle to get close to affording Salah, no doubt plays its part too.

One source told ESPN that Salah “continues to train superbly, is always available to play and is a positive and popular figure within the Liverpool dressing-room; he also produces on the pitch and these are the only things that matter to Jurgen and the club.”

Salah has passed up the opportunity to reject speculation that he could be tempted to leave Liverpool for Real or Barcelona on a number of occasions this season. He has also stopped short of saying he wants to play for one of La Liga’s two super clubs, but he has not dismissed the idea either.

Still, if you are a player of Salah’s status — a Champions League and Premier League winner with a track record as one of the game’s most reliable goal scorers — being linked with big moves is par for the course, so why not keep everyone guessing by leaving all doors ajar, just in case?

And if you grant exclusive interviews to the Spanish media, as Salah has done on two occasions this season, it is a safe bet that you will be asked about playing for Real or Barca. If Salah had offered his time to Gazzetta dello Sport or Bild, he would be asked the same question about Juventus or Bayern Munich.

When he spoke to Marca last week — perhaps insensitive timing ahead of Tuesday’s clash with Real — Salah was happy to keep everything on the table when asked about staying at Liverpool or moving to La Liga.

“It’s not up to me,” Salah said, before a follow-up question about playing in Spain. “I hope to be able to play for many more years. Why not? No one knows what’s going to happen in the future, so… maybe one day, yes.”

In December, when asked directly by AS about playing for Real or Barca, Salah replied: “I think Madrid and Barcelona are top clubs. We never know what is going to happen in the future.”

But Salah added that he wanted to “break records here [at Liverpool] and, I repeat, every record in the club, but everything’s in the hands of the club.”

In the AS interview, Salah also revealed that he was “very disappointed” to have been overlooked by Klopp as captain for the Champions League group game against FC Midtjylland, when Trent Alexander-Arnold was given the armband instead in the absence of Jordan Henderson. Klopp said he spoke to Salah to clear the air, having mistakenly thought that Alexander-Arnold was the longest-serving player on the pitch and that the captaincy should instead have gone to Divock Origi.

Salah has scored 10 goals in 20 games for Liverpool since his comments in the AS interview, including two in two games against RB Leipzig in the Champions League which helped the club seal a quarterfinal spot.

At times, his performances have dipped and when substituted by Klopp during the Premier League defeat at home to Chelsea last month, Salah’s representative, Ramy Abbas Issa, posted a cryptic tweet — a full stop — within seconds of his client being taken off the pitch.

That social media post has never been explained, so has been interpreted in many different ways, and as reported by ESPN last week, some of Salah’s Liverpool teammates believe that the former Roma forward is readying himself for a summer transfer.

But with two years to run on his contract and a lack of obvious buyers this summer, Liverpool believe they are in control of the situation and that, while Klopp remains happy with Salah’s contribution, there is no issue to address.

Sources have also said that, while Salah is part of the strong team unit built by Klopp, he has cultivated an air of mystique around himself and that he understands his worth, on and off the pitch, better than most players in the modern game.

Salah rarely gives interviews and chooses each one carefully, so there is an acceptance at Anfield that he knows the full impact of his comments whenever he speaks.

But there is also a frustration that, while Salah’s words are analysed and interpreted to point to a rift between the player and his manager and club, there is a different perspective when Harry Kane reacts to questions about his Tottenham future by saying “it is hard to answer right now.”

Only Kane (19) has scored more Premier League goals than Salah (18) this season, so there are no concerns within Liverpool over his performances on the pitch.

But some players create more noise than others, especially when they help turn up the volume themselves, yet as Liverpool prepare to face one of the teams that Salah has repeatedly been linked with, the most important figure at Anfield — Klopp — is prepared to put up with it all because the end product continues to be the same as it has always been.