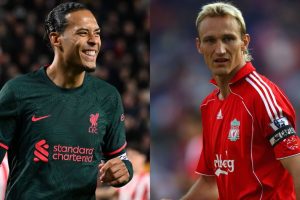 Liverpool are reportedly interested in signing Swedish prospect Johan Bangsbo, with the 19-year-old impressing with IFK Goteborg. The club are looking to acquire a young defender in the coming transfer windows, as Jurgen Klopp plots his squad reshuffle.

The Reds are currently eighth in the Premier League, with their poor form and ageing stars central to their downfall. Key players, such as Virgil van Dijk and Mohamed Salah, have failed to find their best form this season, leading to suggestions of an overhaul at Anfield.

Liverpool are expected to invest heavily over the summer in rebuilding their midfield, with Borussia Dortmund star Jude Bellingham and Wolves playmaker Matheus Nunes high on the club’s shortlist. Though several players could be brought in with the future in the mind.

According to Swedish news outlet FotbollTransfers, the Reds are showing interest in signing teenage defender Bangsbo. The central defender is only valued at £1million by Transfermarkt and would be a cut-price reinforcement for Klopp.

Van Dijk and Joel Matip are the first-choice defensive partnership in Merseyside, with Ibrahima Konate still improving and a quality rotational option in the short term – until he is relied upon more consistently. Joe Gomez also provides strong depth in the defensive department having penned a long-term contract extension at the club last year after previously looking destined to depart.

Fifth-choice defender Nat Phillips is reportedly expected to leave Liverpool in the near future, which leaves a vacant spot in the squad for Bangsbo to fill upon his arrival. The Reds have enjoyed success when recruiting from Scandinavian sides previously and nurturing their progress so that they are ready to step up into the Premier League when called upon.

Daniel Agger and Sami Hyypia are prime examples of that tried and tested recruitment method, and with Liverpool in need of a refresh, it may be time for the club to return to its proven strategy. Bangsbo is not short of confidence and may jump at the chance to work alongside Van Dijk, who he believes that he is similar to style-wise.

He told Sportsbladet: “The Premier League, like many others. But Barcelona is my favourite team. I watched Messi when I was younger. But if I look at a player’s way of playing, it’s probably Van Dijk.” It remains to be seen whether Liverpool make their interest in the defender concrete or play the waiting game in hope of him joining another club in a top European league and proving himself there first.