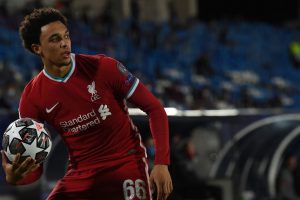 Liverpool have released a statement condemning the racist abuse aimed at Trent Alexander-Arnold and Naby Keita on social media in the wake of the 3-1 defeat to Real Madrid.

The Reds duo are the latest in a long line of football stars to be targeted by online trolls, just days after West Brom striker Callum Robinson was hit with abuse after the 5-2 win over Chelsea.

Alexander-Arnold and Keita were two players targeted after last night's defeat in the Spanish capital, according to Sky Sports.

Liverpool are now calling on social media companies to do more to combat vile abuse which is now commonplace.

"Once again we are sadly discussing abhorrent racial abuse the morning after a football game. It is utterly unacceptable and it has to stop.

"LFC condemns all forms of discrimination and we continue to work with our inclusion partners through our Red Together initiative to campaign against it.

"As a club, we will offer our players any and all support that they may require. We will also work with the relevant authorities to identify and, if possible, prosecute those responsible.

"We know that this will not be enough until the strongest possible preventative measures are taken by social media platforms and the regulatory bodies which govern them.

"The current situation cannot be allowed to continue and it is incumbent on all of us to ensure that it does not."

“The sheer volume of racism, bullying and resulting mental torture to individuals is too toxic to ignore," the Frenchman said.

"There HAS to be some accountability. It is far too easy to create an account, use it to bully and harass without any consequence and still remain anonymous.

"Until this changes, I will be disabling my accounts across all social platforms. I’m hoping this happens soon.”