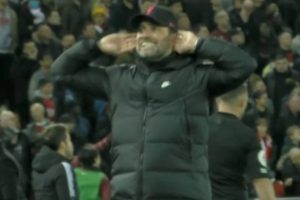 Liverpool boss Jurgen Klopp’s celebration for Sadio Mane’s goal may have had something to do with his row with Mikel Arteta moments earlier. The return to Premier League action had already brought plenty of topics on Saturday with Manchester United once again taking the headlines with a demoralising defeat to Watford.

Chelsea had also torn Leicester apart in the earlier kick-off while both Burnley and Crystal Palace and Newcastle and Brentford played out entertaining 3-3 draws.

Arguably the biggest game of the day was still to come at Anfield though as Liverpool played host to Arsenal.

The Gunners were the in-form side heading into the match at Liverpool while Klopp’s side were nursing a host of injury issues.

Liverpool have had the upper hand over Arsenal in recent years, although matches between the two clubs have notoriously been close-fought affairs.

That was expected this time around too with both Klopp and Arteta desperate for all three points.

Both managers are notorious for being vocal on the sidelines and the pair came to blows in tremendous fashion midway through the first half.

The row appeared to stem from a coming together between Mane and Takehiro Tomiyasu, with Arteta having to be held back by his coaching staff.

Both managers were eventually shown a yellow card, but the argument raised the atmosphere inside Anfield.

Liverpool responded to the raise in volume on the pitch and just minutes later found the breakthrough when Mane headed in from Trent Alexander-Arnold’s cross.

The breakthrough raised the roof inside Anfield with Liverpool’s bench going crazy in celebration.

Klopp was spotted leaping off his seat and cupping his ears in celebration, appearing to lap up the noise which all started from his row with Arteta.

Liverpool fans continued to raise the roof in pushing their team further forward and the players were responding.

There were cheers as the Reds players left the pitch for half-time and Klopp’s side continued their dominance in the second half.

Arsenal struggled to cope with Liverpool’s fearsome front three and the hosts soon doubled their lead after the break.

Diogo Jota intercepted a lax pass from Nuno Tavares before rounding Aaron Ramsdale to finish into an empty net.