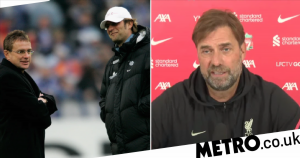 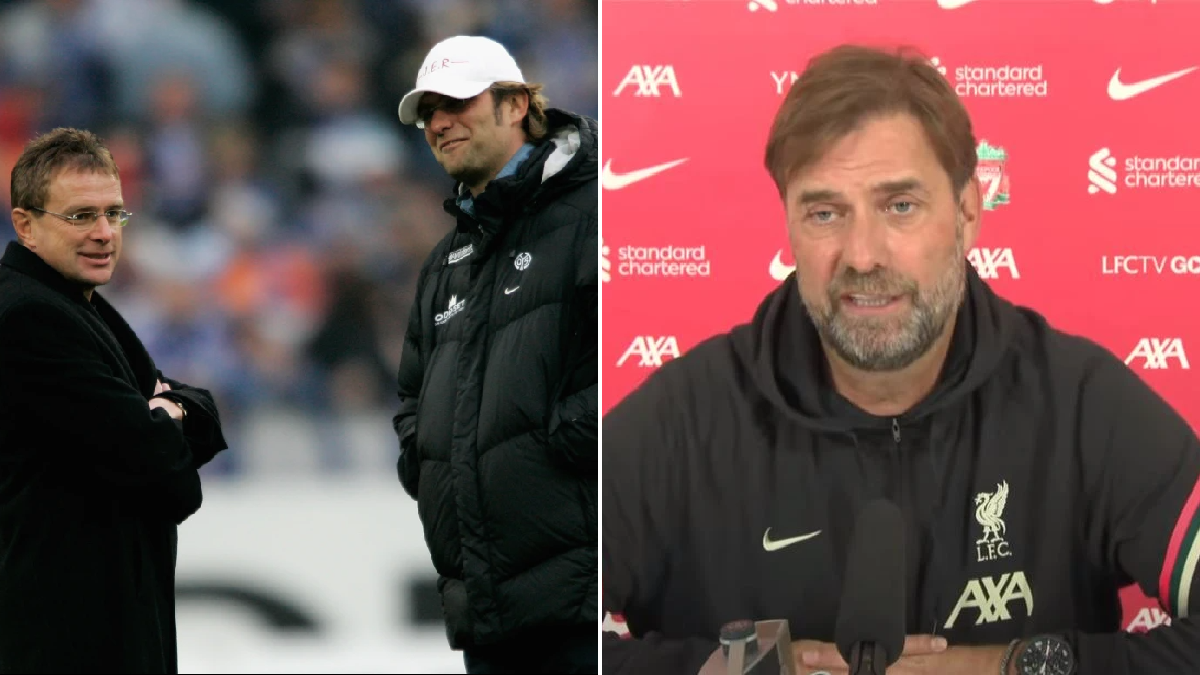 The 63-year-old is set to leave his role as head of sport and development at Lokomotiv Moscow and will take over the reins at Old Trafford until the end of the season once he has received a work permit, after which he will take up a consultancy role.

Klopp knows Rangnick well, with his own high-pressing style of play heavily influenced by the ‘Godfather of gegenpressing’, and believes he will have a big impact at United – and the rest of the Premier League need to watch out.

Speaking ahead of facing Southampton on Saturday, Klopp said at his pre-match press conference on Friday: ‘So it’s a bit tricky, usually we don’t talk about things that are not confirmed yet but if you tell me it will happen then I might believe you.

‘Yeah, unfortunately a good coach is coming to England, that’s how it is, to Manchester United.

‘He’s obviously a really, really experienced manager. He built most famously two clubs from nowhere to proper threats and proper forces in Germany with Hoffenheim and Leipzig.

‘He’s done a lot of different jobs in football but always his first concern was being a coach actually, being a manager, and that’s what his best skill is obviously.

‘United will be organised, I think, on the pitch. I think we should realise that and that’s obviously not good news for other teams.

‘But like all coaches in the world, we need time to train with our teams and Ralf will pretty quickly realise he has no time to train because they play all the time so that makes it a bit trickier for him.

‘But apart from that a really good man and an outstanding coach, if it happens, will come to England.’

On his own relationship with Rangnick and how highly his compatriot is regarded, Klopp continued: ‘Between the coaches he is very highly regarded obviously. Where he was, he did incredible jobs. It started early as a very, very young man at Stuttgart coaching the second team, going from there.

‘I don’t know all the early clubs he had but I’m pretty sure he went to Ulm and brought them to the Bundesliga which was absolutely insane at that time and then made his way up from there.

‘We faced each other for the first time really when I was a really young coach and he was at Hannover. He might have forgotten that but they played always our opponent a week later so he called me the young manager of Mainz and asked plenty of questions.

‘I was happy that big Ralf Rangnick was calling me but he got all the information he needed and they got promoted and we didn’t so he owes me still something and apart from that in the football world in Germany he is very, very well regarded and rightly so.’