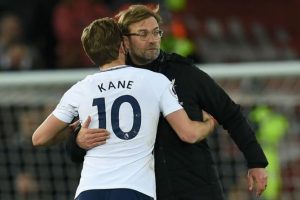 Liverpool manager Jurgen Klopp has admitted the club has ‘limits’ as Manchester City eye their second triple-figure summer signing. The Premier League champions are readying another bid for Tottenham Hotspur striker Harry Kane, a move that would astonish Klopp.

According to Fabrizio Romano, Man City are preparing a new offer for Kane worth around £127million.

City are willing to include add-ons to convince Tottenham to offload the 28-year-old and add to Pep Guardiola’s all-star squad this month.

Guardiola has already been heavily back again in the transfer window with the £100m addition of Aston Villa captain Jack Grealish.

Speaking on the matter, Klopp has labelled Kane’s potential City move as ‘incredible’ and suggested he wouldn’t make Liverpool’s ‘limits’ as an excuse.

He said: “They obviously don’t have any limits, but we were quite successful given our limits in the last two years, and that is what we should try again.

“We will not use it as an excuse. If Harry [Kane] is going to Man City, that would not make them worse! So that’s incredible.

“[But] we are Liverpool, with a specific way we have, the support of our fans, we can create an atmosphere nobody else can – I’m 100 per cent that is the truth.

“So let’s do that. We want to use our resources, and that is passion, a good way, desire, a clear plan, direction, flexibility.

“That is our football and that is what we want to use. And then let’s see which is the right way.”

However, he claimed he struggles to understand how they sanction the transfers they do, with all three making big signings this summer.

“Am I surprised clubs are now spending £100m on players? No, I’m never surprised about the financial power of Chelsea or City or United,” Klopp explained.

“I am long enough in the country to know they always find a solution to these kind of things.

“There is no criticism at all. I don’t understand how it is possible, but it seems to be possible for them, and that is the situation.

“I know for us it is not possible for us so why should I now always sitting here [saying] ‘yeah we better sign him.”