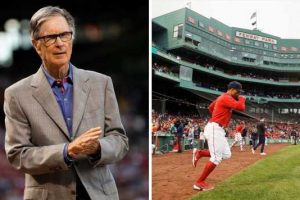 Liverpool and Boston Red Sox owner John Henry was booed as he spoke in front of baseball fans for the first time in almost three years on Friday night. Henry and his Fenway Sports Group have been heavily scrutinised for their lack of investment in their sports teams, including the Red Sox.

FSG boss Henry appeared on stage at the Red Sox’s Winter Weekend event in Springfield, Massachusetts in an attempt to build a bridge between the fans and the team ahead of Spring Training, which takes place in March ahead of the 2023 Major League Baseball season. It was his first public appearance for fans since the Red Sox traded star Mookie Betts to the Los Angeles Dodgers in February 2020.

Henry appeared alongside Red Sox CEO Sam Kennedy, chief baseball officer Chaim Bloom and team manager Alex Cora. The owner faced the ire of a fanbase who, like Liverpool fans, feel they have been robbed of adequate investment by the ownership group compared to rival teams.

The boos began when Henry suggested the reason for high ticket prices at the Red Sox’s iconic Fenway Park was that ‘baseball players are expensive’. The comment angered Boston fans who feel FSG can spend more given their $10billion valuation.

FSG owns the Red Sox, Fenway Park stadium, Liverpool and NHL franchise Pittsburgh Penguins, as well as half of Roush Fenway Racing and 80% of the New England Sports Network. Henry managed to control the displeasure as he reiterated the group’s commitment to Boston and to winning further championships, with their last coming in 2018.

“I think it’s important to say that over the years, we’ve given everything that we can give to this franchise,” Henry said. “We live and die every game.

“Look, I’ve had my share of disappointment… we’ve had quite a few. Often, those years have been a disappointment because we’ve been focused on what came next.

“You have to make decisions. You have to let players go sometimes. That’s very, very tough. It’s the worst part of this game… It really sucks. I just want to let you know that we think about everything that happens here. We’re fully invested, not just monetarily, we’re fully invested in wanting to win championships. I promise you.”

Frustration has built up amongst Red Sox fans for a number of years and they expected investment to come after a poor season but fan favourite Xander Bogaerts left the team in free agency amid an uproar. Across the pond in Liverpool, it’s been a wild ride over the past eight years but they are struggling in the Premier League this season.

The Reds have enjoyed tremendous success on the pitch since FSG got involved, as Jurgen Klopp’s side won the Champions League in 2019 before winning their maiden Premier League title the following season. FSG are reportedly willing to listen to offers for Liverpool but only at the right price as a partial sale to a ’strategic partner’ is preferred.