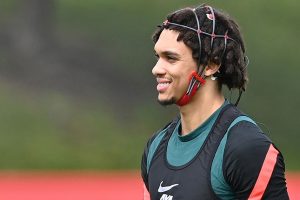 Liverpool have taken their Champions League final preparation to the next level by using cutting-edge brain monitors in training this week.

Jurgen Klopp ’s side will face Real Madrid in the Parc des Princes on Saturday night. Victory over Carlo Ancelotti’s team would see Liverpool end the season with three trophies, following their triumphs in the Carabao Cup and FA Cup finals.

And they are not leaving any stone unturned in their efforts to overcome the side which beat them 3-1 back in the 2018 edition of the Champions League final. The match will be the Reds’ 63rd of an exhausting and relentless campaign, so the club have sought the help of a company called neuro11 to seek an edge on their opponents.

The German organisation has been working with Liverpool since August is trying to help the club’s players improve precision by reaching their optimal mental state. That is why Liverpool stars Trent Alexander-Arnold and Kostas Tsimikas were pictured wearing sensors on their heads in training at their Kirkby base on Wednesday.

The novel idea is the work of Dr Niklas Hausler and his business partner Patrick Hantschke, who oversee the training sessions. The German scientists claim to be able to deliver specific data for each player and therefore to help the club maximise their individual training programmes.

“This is the next frontier in athletic performance,” Dr Hausler toldThe Athleticin October. “The physical side in football has almost been maxed out. These guys are super fit. The next step really is to directly train the brain. That’s where we come in with something that’s scientifically validated.”

HAVE YOUR SAY! What do you make of Liverpool's approach? Will it help in the Champions League final? Comment below.

Liverpool manager Klopp has always been open to trying out new ideas and cutting edge training methods. He was behind the club embracing throw-in coach Thomas Gronnemark and Hausler says it was Klopp who brought them in at Liverpool too.

“I’d read a lot of articles about his time at Liverpool and it was clear he focuses a lot on the mental side of the game. I wanted to see if he was interested,” Hausler told The Athletic. “It took a while but Patrick’s former academy coach from Cottbus, Ulrich Nikolinski, made it possible for us to contact Jurgen and we were very thankful for his help.

“I sent Jurgen a text and it was just huge when he called us back and invited us to Melwood. It was during a really intense period of matches so it showed there was genuine interest in this. I knew that something special was going on here.”