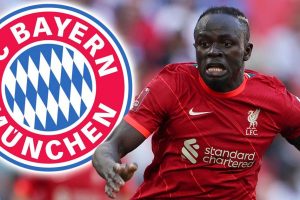 Liverpool have reached an agreement with Bayern Munich over the sale of Sadio Mane after the Senegal international forward pushed for a move away from the Premier League with a year remaining on his contract.

Bundesliga juggernauts Bayern jumped to the front of the race with Robert Lewandowski trying to force a move of his own, and terms have now been agreed over a £35million deal, say Sky Sports News.

The 30-year-old forward hinted before their Champions League final defeat against Real Madrid that he wanted to find a new challenge away from Anfield despite his close relationship with both supporters and manager Jurgen Klopp.

Fabrizio Romano adds that personal terms have been fully agreed over a three-year deal, with the cut-price being met due to Mane having only one more season on his Liverpool contract.

Mane scored a total of 120 goals for the club across his 269 appearances, winning every possible trophy at least once since leaving Southampton.

The former Saints star won the Champions League in 2018/19, with Premier League coming the following year. That was followed by Club World Cup and UEFA Super Cup triumphs, with wins in the League Cup and FA Cup in his final campaign.

Has Sadio Mane made the right move for his career? Give us your thoughts in the comments section

Mane fuelled talk of an exit during a recent press conference in which he said that that 60-70 per cent of people in Senegal want him to leave Liverpool.

"Like everyone else, I'm on social media and I see the comments," explained Mane.

"Isn't it between 60 to 70% of Senegalese want me to leave Liverpool? I will do what they want. We will see soon! Don't be in a hurry because we will see this together. The future will tell us."

The agreement comes after Liverpool agreed a deal with Benfica for Darwin Nunez with fee that could rise to £85million.

He said during his first interview with the club: "I'm really happy and delighted to be here at Liverpool. It's a massive club. I'd like to thank my partner and my parents and my son, who is a real source of pride for me. They've been really important to me in the stages in my career.

"I'm really proud of them, and for the work we do, me and my partner, as a team and I'm grateful to her that I'm here. It's a pleasure to be here in Liverpool and I'm very happy to be a part of this great club."