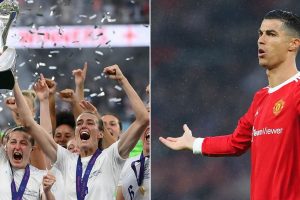 Shirt-waving Chloe Kelly and Ella Toone were the heroes at Wembley on Sunday as Sarina Wiegman's side defeated Germany 2-1 to claim a first major tournament success. It also doubled up as the country's first major football win since the 1966 World Cup.

Yet stars like Kelly, Toone and tournament top scorer Beth Mead didn't earn as much as you might think from their Wembley heroics, with each player reportedly pocketing a pre-agreed £55,000 victory bonus by the Football Association.

That's not chicken feed by any stretch of the imagination, but it pales in comparison to what stars like United ace Ronaldo take home in just a single day.

Various reports put the Portuguese forward's wage at £385,000-a-week. That equates to £55,000 every single day – the same amount the Lionesses won in bonuses for their Euros triumph.

The numbers are also in stark contrast to what the England Men's team would have banked had they gone all the way at Euro 2020 last summer. Gareth Southgate's side were guaranteed £300,000 just for reaching the final.

Women in Sport last weekend condemned the bonus pay gap, saying: "Why shouldn’t we ask for equal prize money and pay? We are already seeing this across tennis and cricket. This expresses and demonstrates the value that these teams bring to sport.

Should England's Lionesses have earned more for their Euro 2022 success? Let us know in the comments section below.

"Increased investment is vital across every level of women’s sport. For girls to realise their aspirations they need a place to do this on their doorsteps. This should be the legacy of the Euros."

The Lionesses become the history makers!

Make sure you get a copy of our 48 page special celebrating England's fantastic victory over Germany in the final of the UEFA Women's EURO championships featuring all the final action, celebration pictures, the road to Wembley glory, tournament wallchart, stats and facts and a fantastic centre spread souvenir poster. Only £3 and available to pre-order NOW

It is believed the Lionesses each receive a match fee of around £2,000 per appearance, meaning any player who featured in every game during the tournament would have taken home around £67,000.

A spokesperson said: "The FA pays its women’s players exactly the same as their male counterparts for representing England, both in terms of match fees and match bonuses. This parity has been in place since January 2020."