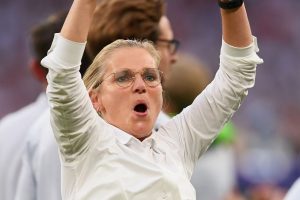 Sarina Weigman turned down an early-morning beer from England star Lucy Bronze as the Lionesses' celebrations continued into their second day.

The Lionesses brought football home after beating Germany 2-1 in the Euro 2022 final at Wembley on Sunday evening. Chole Kelly was the difference maker when she reacted first to a loose ball in the box deep into extra time.

And as the English side have rightfully enjoyed their celebrations, England boss Weigman turned down the chance to join in on some early celebrations. Bronze, on Monday, said: “I think Sarina was finding it hard to keep up with the English ways!

“She had a few comments this morning! I tried to give her a beer before she started the meeting, and she was like: ‘Please don’t, Lucy’.

"Hopefully, we can have more nights like that. So she’s going to need it!"

What have you made of England's celebrations? Let us know in the comments section below

Bronze herself channelled her inner Freddie Flintoff as she appeared for celebrations at Trafalgar Square sporting a pair of glasses – that she admitted were a 'necessity'.

The Barcelona full-back joked: "I think most of us only got a couple hours sleep. Hence the sunglasses. I feel like I’m on top of the world."