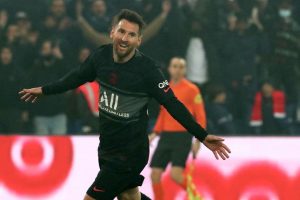 Lionel Messi officially opened his domestic account at Paris Saint-Germain with a well-taken strike in trademark fashion against Nantes in Ligue 1.

The Argentine sailed through on 86 minutes as PSG were 2-1 ahead and buried his shot into the far corner of the net from outside the box.

The goal marks his first-ever for the French side in the league following his widely-publicised free transfer from Barcelona over the summer window.

The 34-year-old got on the scoresheet late on after Dennis Appiah's own goal provided the home side with a goal cushion. Randal Kolo Muani had cancelled out Kylian Mbappe's opener in the first half before PSG went to ten men when Keylor Navas took out Ludovic Blas on 65 minutes.

The result means PSG have taken 37 points from 14 games, while Nantes are 11th on 18 points.

Messi has already netted for the side on three occasions, those coming in the Champions League, but the Argentine struggled to find the net in his last five outings in Ligue 1.

His move sparked discussion about the potential of the front trio of Lionel Messi, Kylian Mbappe and Neymar.

Discussing the trident, the Argentine told French outlet L'Equipe : "They are the best in the world. Why take them off the pitch?

How many goals do you think Messi can get in Ligue 1 this season? Let us know your thoughts in the comments section below.

"Even if they do not play as one expects, with their talent they can be decisive at any time. That is why the club made the financial effort it did to sign them.

"You cannot evaluate this type of footballer the same as others, because they are different.

PSG now go up against Manchester City in the Champions League. The pair, who sit second and first in their group respectively, will earn a spot in the playoffs and become group winners should they get all three points.

They play at the Etihad on Wednesday, November, 24, with PSG winning the reverse fixture 2-0 at the Parc des Princes.