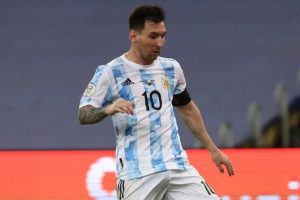 Lionel Messi will not be training with Barcelona until he signs a new contract at the Spanish club, according to reports. The Argentine has been a free agent since July 1 but is still likely sign a new deal at the Catalan giants.

The 34-year old is currently enjoying an extended holiday after playing in last month Copa America for Argentina.

Messi captained his national team to the title in South America as they beat hosts Brazil 1-0 in the final.

The victory in Rio ended years of heartbreak for the legendary Barcelona forward.

Messi had suffered defeats for his country in previous Copa America finals and in the 2014 World Cup final when Argentina lost to Germany.

Despite representing his country over many years, the forward’s achievements are more recognisable in the club game where he has broken countless records.

At Barcelona, Messi has won a record six Ballon d’Ors and has played a record 767 games for his club.

He is also their all-time leading goal scorer with a staggering 672 goals since making his senior debut aged 17 in October 2004.

During his time in the Catalan capital, he has won 10 La Liga titles and 4 Champions Leagues.

But his future at Barca has not always been certain.

Last summer, after almost two decades at Barcelona Messi told the club that he wanted to leave for a new challenge.

Manchester City were one of the clubs interested but a move never materialised.