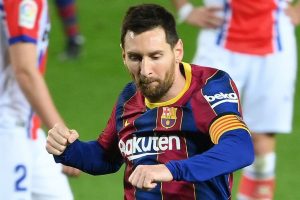 Lionel Messi is expected to sign a new two year-deal at Barcelona, ending any speculation of a possible move to Manchester City.

The Argentinian forward shocked world football last summer after requesting to leave the La Liga giants and attempting to force through a move away from Camp Nou.

City were named as the most likely destination for Messi, due to the player's relationship with Pep Guardiola as well as the club's financial power to pull off such a transfer.

Messi's contract is due to expire at the end of this month, though multiple reports from Spain have indicated that the 33-year-old is ready to commit to Barcelona.

One factor that may have played its part in his decision to stay is the arrival of Sergio Aguero.

The pair have been friends for a long time and will now be offered the opportunity to play alongside each other for the first time at club level.

Aguero himself was asked about Messi's future at his presentation ceremony, and said: “Let’s hope we can play together, of course.

“As president [Joan] Laporta said, we’ve been negotiating for a long time and whatever happens with Leo will be his decision along with the club

“Obviously, it would be a pleasure and it would make me very proud to play together. I’ve played with him in the [Argentina] national team since we were kids, I know him quite well and I hope we can play together here.

“I think we will, but let’s hope we can do the best for the club.”

“Leo surely deserves more and could make more elsewhere, but his desire is to make Barça great," Laporta said.

"I am sure that he appreciates the effort we are making, and I think that he is excited and motivated by the project we are building.

“For Leo, it is not about money, it is about the team and its chances of winning. Leo, above all, wants to feel comfortable, to feel appreciated. And then to win.”