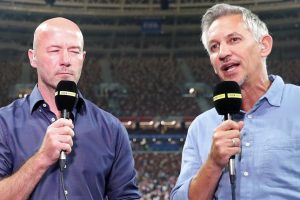 Gary Lineker is the BBC's highest earner, making over £1 million pounds-a-year from his presenting roles at Match of the Day.

Lineker, who earns £220,000-a-year more than second-placed Ball, even agreed to a £390,000 paycut last year when signing his new contract as host of Match of the Day.

The Premier League highlights show, airing at 10:30pm on a Saturday night, was renewed by the BBC for £211.5 million back in 2018 which will see the show run until at least the end of this upcoming season.

On Tuesday afternoon the BBC released their annual financial report, confirming the wages of their highest on-air earners.

At the top, for the fourth successive year, was Lineker who collects a staggering £1,360,000 a year from his Match of the Day presenting duties.

Co-host Alan Shearer also featured as one of the BBC's highest earners, raking in £390,000 for his analysis.

What do you make of Lineker and Shearer's earnings? Let us know in the comments section

The former Newcastle United striker has been a regular alongside Lineker since joining the team in 2006 ahead of the World Cup in Germany.