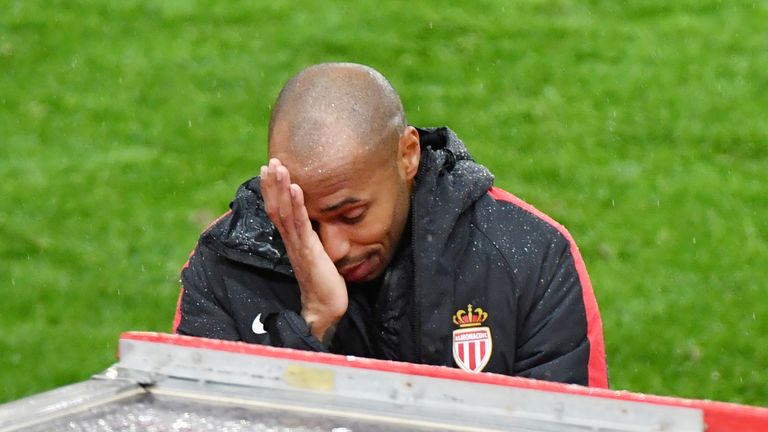 Thierry Henry is still searching for his first victory as Monaco coach after the Ligue 1 strugglers drew 2-2 with Dijon on Saturday, while second-place Lille extended their winning run to four matches.

Henry, who took over from the sacked Leonardo Jardim earlier this month, needed a powerful header from centre-back Kamil Glik on 78 minutes to prevent Monaco crashing to a fifth straight league loss.

Germany full-back Benjamin Henrichs opened the scoring for Monaco on 30 minutes, but the 2017 French champions fell behind at home after Dijon responded with goals from Mickael Alphonse and Mehdi Abeid.

Poland international Glik rescued a point for Monaco although they are now winless in 13 outings in all competitions and above bottom club Guingamp, who drew 1-1 with Strasbourg, only on goal difference.

“It’s good we came back for the draw, but it’s not a win. I’m trying to stay positive. I have to stay positive when things are tough,” said Henry, who lost Nacer Chadli to injury in the warm-up.

Lille have surprisingly emerged as Paris Saint-Germain‘s closest challengers, after the club narrowly avoided relegation at the end of last season.

Christophe Galtier’s side closed to within five points of PSG as Portuguese teenager Rafael Leao netted a 56th-minute winner in a 1-0 defeat of Caen on his first start for Lille.

Montpellier, unbeaten since the first weekend of the season, stayed in third after strolling to a 3-0 win at Toulouse with goals from Gaetan Laborde, Andy Delort and Junior Sambia.

Lyon climbed one spot to fourth with a 2-1 victory away to 10-man Angers.

The hosts played almost an hour with a man less after Ismael Traore was sent off for a crude tackle on former Celtic striker Moussa Dembele.

Houssem Aouar put Lyon ahead on 63 minutes and Memphis Depay added a second late on, but Lyon faced a nervy final few minutes after Cristian Lopez pulled a goal back for Angers.

Nantes secured a second win in a row under new boss Vahid Halilhodzic, the Bosnian forward who starred for the club in the 1980s, as Gabriel Boschilia and Emiliano Sala were on target in a 2-1 triumph at Amiens.

PSG take on great rivals Marseille on Sunday looking to match Tottenham Hotspur’s record of 11 straight wins in the 1960-61 campaign, the best start to a season in any of Europe’s top five leagues.

Marseille have not beaten their most bitter foes for seven years, but they received a boost on Saturday as Rudi Garcia extended his contract until 2021.