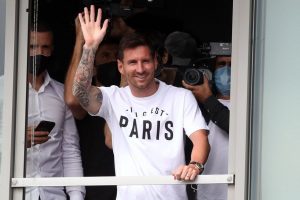 Ligue 1 are prepared to make a rule exception for Lionel Messi as one of the biggest transfers in the history of football nears completion.

After 21 years at FC Barcelona, financial issues have forced Messi to part ways with the Catalan club and now looks set to join Paris Saint Germain on a two-year contract reportedly earning €25 million-a-year.

It was assumed that Messi would take the no.19 shirt as friend and former teammate Neymar would keep the iconic no.10, but this may not be the case.

Instead Messi may take a different number, which isn't usually allowed under Ligue 1 rules.

Spanish outlet Marca have reported that PSG have offered Messi the No.30 shirt and it is "likely to be chosen" by the six-time Ballon d'Or winner.

Messi began his career as no.30 at Barcelona before switching to the no.19 shirt in 2006. The Argentine was handed the iconic Barca no.10 following Ronaldinho's departure, but that is not available this time around.

Will PSG win this season's Champions League? Comment below

Currently under Ligue 1 rules, the no.30 must be reserved for goalkeepers, but Messi may be granted an exception as the league look set to put that aside for arguably the greatest player in football history.

Gianluigi Donnarumma, also signed for PSG on a free transfer this summer, and took the no.50 shirt because he was not allowed to wear the no.99 he famously wore at AC Milan.

Ligue 1 have been known for their strict number rules previously, as former Nice and Marseille striker Mario Balotelli had to wear the conventional no.9 shirt during his time in France, as he was not allowed to have his trademark no.45.