Lewandowski’s emotional chat with Klopp that turned his career around 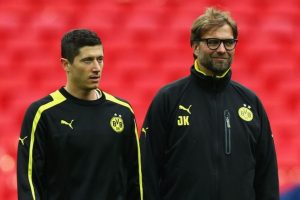 Robert Lewandowski has opened up on his 2011 conversation with then-Borussia Dortmund boss Jurgen Klopp which helped transform him into one of Europe's finest strikers.

Lewandowski had moved to the Bundesliga giants in the previous year from Polish side Lech Poznan.

It marked the first time he had played outside his native country and it was a challenging time for the young striker, who lost his father in 2005.

Lewandowski scored eight goals as Dortmund won the Bundesliga in his debut season, but he started his second campaign at the Westfalenstadion slowly with two goals in seven league games.

A heavy Champions League group-stage defeat to Marseille in September 2011 piled pressure on the young Pole – but a chat with Klopp helped turn his form on its head.

"When the second season began, I was still struggling," Lewandowski told The Players' Tribune . "I also felt that Jurgen wanted something from me, but I didn’t understand exactly what.

"So after a really bad defeat to Marseille in the Champions League – I think we lost 3–0 – I went to see him. I said, 'Jurgen, come on. We have to speak. Just tell me what you expect from me.'

"I can’t remember everything he told me – my German still wasn’t the best – but through the few words I knew and from his body language, we understood each other. We had a great chat.

"Three days later, I scored a hat trick and assisted another goal against Augsburg. We won 4–0, and that was the turning point for me.

"It was a mental thing, a hang-up of some sort. And I think it had something to do with my father.

"At the time I didn’t think about it. But now I realise that my conversation with Jurgen was like one of those I wish I could’ve had with my dad. One of those I had not been able to have in many, many years.

"I could talk to Jurgen about anything. I could trust him. He is a family man, and he has so much empathy for what goes on in your private life."

Lewandowski went on to net 30 goals in all competitions and lay on 12 assists as Dortmund won the Bundesliga and DFB-Pokal in the 2011/12 season.

What are your memories of Robert Lewandowski playing under Jurgen Klopp? Have your say in the comments.