Neil Lennon hailed Fraser Forster after a stunning late penalty stop moved Celtic a step closer to the last 16 of the Europa League.

Referee Sergei Karasev penalised Ryan Christie for a handball after 76 minutes in the game against Copenhagen after consulting the Video Assistant Referee.

The first time a pitchside monitor has overseen a match involving a Scottish side, a two minute delay was followed by Forster throwing himself low to the right to tip a Jens Stage penalty onto the base of the post. 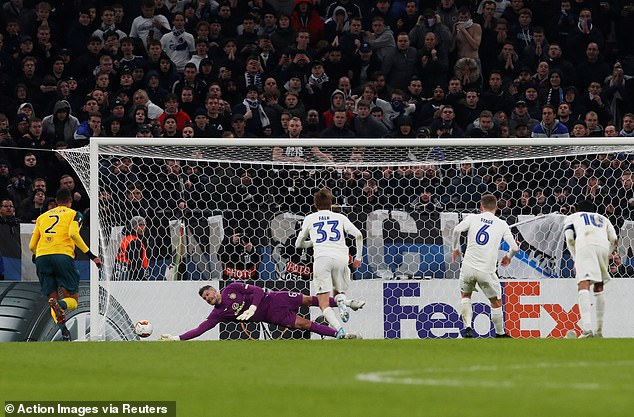 Taking control of the match after Odsonne Edouard’s sublime finish in the 14th minute a mistake by Celtic midfielder Olivier Ntcham gifted Stale Solbakken’s side a leveller through Dame N’Doye in the 52nd minute.

Denied time and again by home keeper Karl-Johan Johnsson the Parkhead side ended the night relieved to head into Thursday’s second leg in Glasgow with a foot in the last 16 thanks to Forster’s heroics.

‘He’s brilliant,’ said Neil Lennon, ‘but that’s down to the work that he and (goalkeeper coach) Stevie Woods do behind the scenes.

‘I have no real complaint about the penalty it does come off Ryan’s arm in an unnatural position if you want to call it that.

‘Credit to Fraser he’s done brilliantly with a magnificent save. I think it would have been really harsh on us if we’d lost the game with the amount of chances we had, especially in the first half.

‘But we have the away goal so the tie is set up nicely for going back to Glasgow.’ 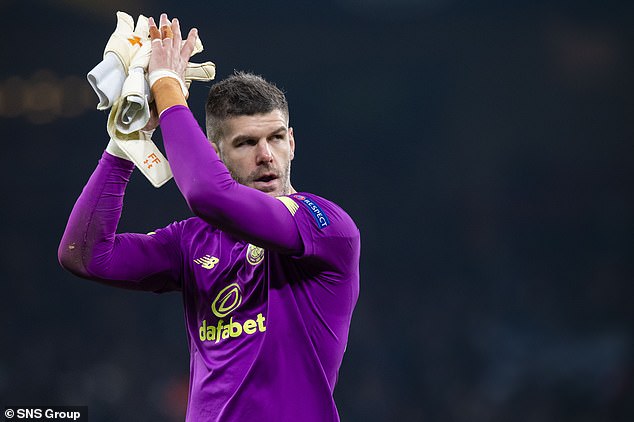 Edouard’s deft dinked finish capped a blistering start to the game when Celtic could have placed the tie beyond their opponents before a second half fightback. Lennon expressed disappointment with the loss of a ‘sloppy’ goal after Ntcham gifted possession to the home team for the leveller.

Refusing to be critical of his players, however, he said: ‘I thought we had good control of the first half and going in 1-0 at half-time I thought we could have been maybe two or three up.

‘We gave away a poor goal from our point of view and it gave Copenhagen a huge lift psychology. But on the counterattack we had some great chances in the second half as well so I’m disappointed we haven’t come away with more goals.

‘I think most people would have taken that before the game.

‘It was a partisan crowd, a difficult atmosphere to play in, it’s loud.

‘I thought in the main the players handled it pretty well, just in the last 20 minutes they had to dig in, dig deep and show some resilience.’ Booked for his handball at the penalty Christie now misses the second leg after crossing the threshold.

Captain Scott Brown is also a doubt after leaving the pitch with a calf problem after 70 miutes. 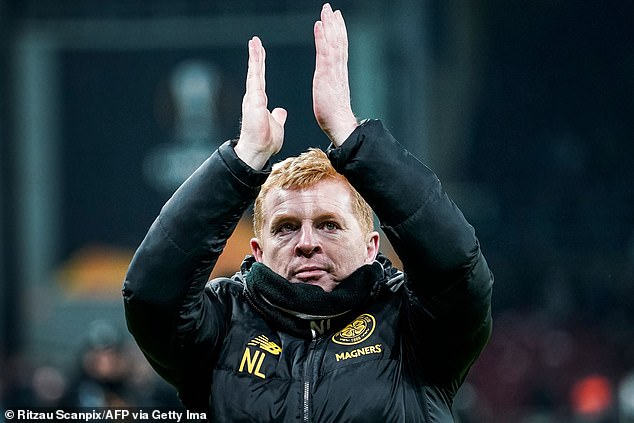 ‘Obviously we lost Browny with a calf strain and we’ll have to see how that is but in the main we are pleased with the score.

‘It was a great game of football, it ebbed and flowed. I am disappointed if I’m honest that we aren’t ahead in the tie.

‘In the first couple of minutes we had a great chance and then another shortly after that and then we scored and we then had a couple of great counterattacks we could have picked them off and put the tie to bed.

‘It shows that we can score against them, that’s for sure, and open them up. But we have to pay respect to Copenhagen they came back very strongly in the second half.

‘To come away from home it is really difficult. I am delighted that we have come away with a decent result.’ Asked if he now felt confident of progressing on the back of an away goal Lennon added: ‘I wouldn’t say confident, you can’t be confident.

‘You can believe and I think the players will believe that as well. They have the capabilities to score at Celtic Park.’