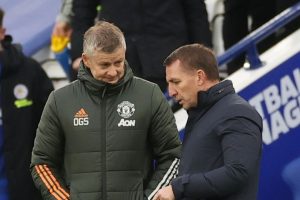 Brendan Rodgers has urged his Foxes to hunt down second-placed Manchester United in the Premier League.

Rodgers' men showed patience and composure to come from behind to beat Crystal Palace 2-1.

Kelechi Iheanacho's late winner means the Foxes have now retrieved 19 points from losing positions this term – the second most in the Premier League behind United.

Last term City missed out on the top four on the final day as they won just two of their remaining nine League games and lost to United in their last game.

But the third-placed club have already matched last season's haul of 62 points after successive home wins.

And they have a real chance to sock it to the big boys when they face Manchester United, Chelsea and Spurs in their last three Premier League games after taking on Southampton next this Friday and then Newcastle.

Boss Rodgers , whose side are five points behind United, insists he is looking up , not down.

“I always try to catch who is infront of us if we can.

“There is five games to go and we have equalled our points total from last season.

“I think it is clear the team has developed and matured this season.”

Kasper Schmeichel insists Leicester have the mentality to avoid another collapse in a tricky run in after their latest comeback.

Keeper Schmeichel,34, said: “Palace are a difficult side, we always have problems playing against them.

“If they get their noses infront we know it is going to be a difficult game.

“It was just a case of staying calm, playing the way we know we can play.

“We made sure we stayed in the game and we know we are going to create chances with the front players we have.

“We stayed calm and played our game – that was the message.

“Next game is Southampton so we are not going to get ahead of ourselves.

“We have a tough run-in, it is just a case of carrying on as we have been.”

Rodgers reiterated his commitment to Leicester after the win amid links to the Spurs vacancy.

Tottenham are looking for a new boss after sacking Jose Mourinho and Rodgers has been on their radar previously.

But Rodgers has distanced him from the position and his players expect him to remain at the King Power Stadium.

Schmeichel added: “I can't praise him enough for the job he has done and is doing and hopefully for many years to come.”