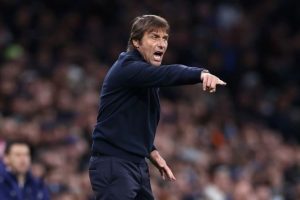 Antonio Conte marked his first-ever league home game as Tottenham Hotspur manager with a win as he looks to rebuild the north London club. Spurs beat Leeds 2-1 in a win that gave supporters a lot to cheer about, but also highlighted that they are still a few marquee signings away from becoming competitive in all competitions.

Spanish wingback Sergio Reguilon scored the winner in the 69th minute when a deflected Eric Dier free-kick rebounded off of the post and into his path to tap past Illan Meslier.

Spurs initially went 1-0 down in the 44th minute when former Manchester United winger Dan James tapped home a superb cross from Jack Harrison following some good work down the left-wing.

Midfielder Pierre-Emile Hojbjerg scuffed home the equaliser in the 58th minute with a somewhat fortunate strike that swung the pendulum in his side’s favour.

There were a few positives to take away from the game for Conte, but a significant amount of negatives as well, especially defensively.

Football.London revealed that Spurs managing director Fabio Paratici is implementing a new and improved scouting network at the club in order to sniff out the very best talent around the world, so who could they be interested in after Sunday’s fortunate win?

Conte may have been watching the answer to his midfield woes on Sunday evening, but sadly for the former Chelsea boss, he won’t be seeing him at training on Monday morning.

Leeds’ Kalvin Phillips was excellent up against Harry Kane, keeping his international teammate under control at all times and muting his influence on the game.

Phillips was linked with a move to Spurs over the summer but a deal never materialised, but the Englishman could be persuaded to take the leap to a club attempting to win silverware if the right offer arrives.

Conte’s system relies on his midfielders working tirelessly and recovering possession before moving it on to the more creative players, and Phillips certainly fits the bill but would come at a premium.

Spurs fans thought that their right-back issues were solved when Emerson Royal arrived in the summer for £25million from Barcelona, but he has really struggled since arriving in the Premier League.

Conte is known for not being the most patient of managers, and if he wants a readymade wing-back with bags of energy then he could look at signing Brighton’s Tariq Lamptey.

The defender has been electric on the south coast since arriving from Chelsea last year, being a presence in both boxes and looking a very exciting talent.

Considering Lamptey is English, 21 and also signed a long-term deal at the Amex earlier this year, Brighton would expect a huge offer for their young defender, but if Daniel Levy wants to win trophies then he will need to spend big.

According to CalcioMercato, via FourFourTwo, Conte is keen to sign Juventus defender Matthijs De Ligt in a bid to add strength to their defence.

The Dutchman has struggled to displace seasoned veterans Giorgi Chiellini and Leandro Bonucci since joining the Old Lady in 2019 for approximately £77m.

De Ligt would provide strength, experience and leadership to the Spurs defence, who looked shaky for the entirety of the first half against Marcelo Bielsa’s Leeds.

The defender is still just 22 years old and has a lot of time to develop and improve, and the idea of working under a serial winner in Conte could prove very attractive.