Leeds given hope of completing £11.4m fourth signing as sporting director speaks out 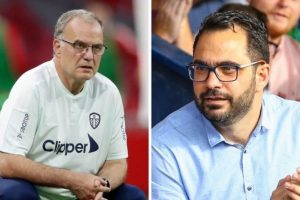 Leeds have been given the green light to move forward with their fourth signing of the summer with Midtjylland open to offers for Jens Cajuste. Leeds head into the Premier League opener with three signings already in the books.

Junior Firpo joined from Barcelona and will be expected to slot straight in as the first-choice option at left-back once he proves his fitness.

Jack Harrison may not technically be a new signing having spent the past three seasons on loan at Elland Road, but his permanent move will be a boost to Leeds moving forward.

And they’ve brought in Kristoffer Klaesson to play back up to Illan Meslier having sent Kiko Casilla out on loan.

More recruits are expected to come in before the transfer window closes at the end of the month.

And signing more options in midfield appears to be a priority for Bielsa having missed out on signing Conor Gallagher.

They’ve now reportedly turned their attentions to Midtjylland star Cajuste, who featured for Sweden at Euro 2020.

According to Danish publication TipsBladet, Leeds have already tested the waters with a bid in the region of £11.4million.

Cajuste made an impact in the Champions League last season and only Lionel Messi completed more dribbles per game than the midfielder in the group stages.

And it appears as though Midtjylland are resigned to losing Cajuste this summer, according to sporting director Svend Graversen.

“There is such a keen interest in Jens that I find it difficult to see that nothing will happen in the near future with him,” Graversen told Tipsbladet.

“Then it is the case for us and for Jens that we must find the optimal solution for all parties.”

But Leeds face heavy competition for Cajuste’s signature with Brentford and Newcastle among those interested.

Brentford may also hold the upper hand in negotiations as club owner Matthew Benham is also a majority shareholder at Midtjylland.