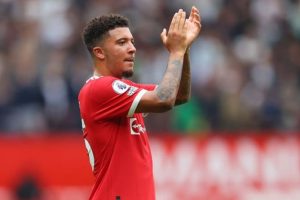 Leeds United fans took aim at Jadon Sancho and Marcus Rashford during their team’s 5-1 drubbing at Manchester United on Saturday. The duo, who featured for England at Euro 2020 this summer, both missed crucial penalties in the final shootout against Italy as the Azzurri broke English hearts in mid-July.

The visiting supporters were as vocal as ever – especially given that fans were allowed in Premier League games at full capacity for the first time since March 2020.

Rashford and Sancho, 23 and 21 respectively, both played bit-part roles in the tournament en-route to the final, with Sancho registering a full 90 minutes in the quarter-final game against Ukraine.

Yet, when it came to the boil, the pair were chosen for spot-kicks, agonisingly missing on the way to England’s unforgettable loss.

The majority of England heaped praise on them for their bravery to take a penalty in England’s biggest game since 1966.

However, an ever so small minority torrented them with racial abuse – leaving the majority of the country even more supportive of their heroes.

Neither player started on Saturday, with Rashford out with a shoulder injury and Sancho having to start on the bench – although the latter did feature for fifteen minutes.

Leeds fans still managed to let their feelings for the youngsters known, taunting them over the penalty misses despite neither being in the starting XI.

And ex-England and Liverpool midfielder Danny Murphy has defended fans of the Yorkshire club, claiming it is ‘just part of football’.

Murphy, 44, played nine times for the Three Lions, scoring once in a friendly against Paraguay in 2002.

He told talkSPORT: “I saw what Beckham had to endure when he kicked out at Simeone. He just used it. I remember him getting hammered at Anfield, it was brilliant.

“It’s football! If you can’t take that, you’re in the wrong job. If you’re talking about homophobia or racism, it’s unacceptable and not needed – most people know the line.

“But you’re gonna get the lads who miss penalties getting stick from the supporters at every ground you go to – it is just part and parcel!”

United continue their campaign away to Southampton next Sunday.