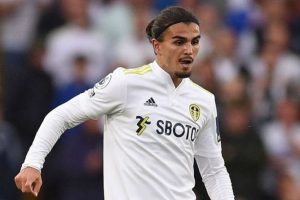 Leeds United have appealed the red card Pascal Struijk received after chopping down Liverpool midfielder Harvey Elliott on Sunday. The Elland Road side went on to lose the Premier League clash 3-0.

The incident on the hour-mark left Elliott in hospital with a dislocated ankle and the player is set to undergo surgery today.

Referee Craig Pawson initially waved play on following the tackle, but then gave Struijk his marching orders after VAR intervention.

The Dutchman currently faces a three-match ban unless the FA overturns the decision ahead of this Friday’s trip to Newcastle United.

Leeds are yet to win in the Premier League this season but did pick up back-to-back draws against Everton and Burnley before the international break.

After inflicting the horror injury, Struijk was quick to apologise to Elliott.

“In today’s game, something happened that I would never wish on anyone,” Struijk wrote on Instagram on Sunday evening.

“@harveyelliott07, my thoughts are with you. I’m gutted and never meant for this to happen.

“I wish you a speedy recovery and hope to see you back on the pitch soon.”

Elliott now faces a lengthy spell on the sidelines, but defended his Leeds counterpart for the tackle.

“Wasn’t his fault what so ever!” Elliott wrote on his own Instagram page.

“Neither was it a red card – just a freak accident but these things happen in football.

Meanwhile, former Premier League and Euro 2016 final referee Mark Clattenburg has joined the debate about whether Struijk should have received a red card for the tackle.

“We haven’t seen all of the replays because of the severity of the injury to Elliott,” Clattenburg wrote in the Daily Mail.

“From the angle we were shown in real time, however, the challenge from Struijk didn’t look a bad one.

“Referee Craig Pawson didn’t even blow for a foul. As far as he was concerned, Struijk won the ball fairly.

“But VAR Darren England assessed the incident and because the injury was so bad, the officials reacted with a red for Struijk.

“It’s a tough one. Years ago when I was with UEFA, we talked in-house about the Luke Shaw double leg break and how a corner was awarded after that incident.

“We discussed the best way to protect players and one way is to ensure that there are consequences for tackles which lead to serious injuries.

“Remember the foul by Heung-min Son on Andre Gomes, for which the Tottenham Hotspur striker was sent off. Spurs appealed that red card and won.

“As far as the PGMOL [Professional Game Match Officials Limited] are concerned, Struijk endangered Elliott. But like Tottenham with Son, Leeds may well win their appeal.”