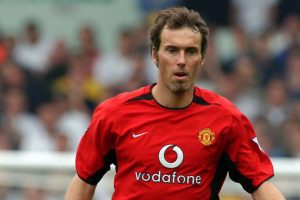 Former Manchester United star Laurent Blanc could be handed the reins at Old Trafford on an interim basis while the club searches for a more permanent replacement for Ole Gunnar Solskjaer.

The Norwegian was sacked on Sunday morning less than a day after United's 4-1 defeat to Watford which left them 12 points behind Premier League leaders Chelsea.

It was the club's fifth defeat in seven league outings and proved to be the final nail in Solskjaer's coffin.

Michael Carrick has been handed temporary control of the first-team while the board assesses its options.

But according to The Athletic, landing one of their top targets mid-season could be difficult, particularly as three of them are currently employed.

Instead, the club could look to bring someone in to steady the ship for a few months before hiring a long-term replacement.

Former France and PSG boss Blanc, who made 75 appearances for United as a player, has been touted as a candidate for the temporary role.

The 56-year-old is currently in charge of Qatari side Al-Rayyan, but prising him away mid-season shouldn't be too much trouble.

He started his managerial career in 2007 with Bordeaux and guided the club to a Ligue 1 title in 2009.

Which former Man United player do you think could turn things around at Old Trafford? Let us know in the comments section below…

A year later, he left for the French national team, leading them into Euro 2012.

France were knocked out at the quarter-final stage by eventual winners Spain, and Blanc resigned after the tournament.

In 2013 he replaced Carlo Ancelotti as PSG boss and won three consecutive Ligue 1 titles before leaving by mutual agreement in 2016.

The Frenchman remained out of work for over four years before joining Al-Rayyan in December last year.