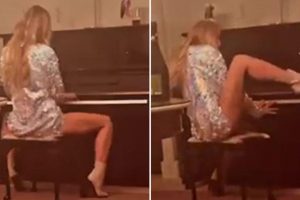 Laura Woods has wowed followers by playing the piano while flaunting her legs.

The TalkSport presenter posted a video of her and some friends enjoying drinks. While Bulletproof by La Roux is rings out, she plays the piano using her hands and even at one point, her high heels. It was a repost of someone else's video, with the original caption reading: “Queen of the 3am playlist @LauraWoodsy.

The presenter was out enjoying her 35th birthday, with Twitter follows sending her wishes for the day. One wrote: “@laura_woodsy Happy birthday Laura. Love your voice on sporting events! Hope you are having/have had a good one. Simply sensational.” Another said: “Happy birthday. @laura_woodsy. Have a great day celebrating!!2 A third stated: “Happiest of bdays to the absolute best in the business, by miles upon miles @laura_woodsy.”

Meanwhile, as an ardent Arsenal fan, Woods silenced Jamie O’Hara after the former Tottenahm player made comments over the Gunners’ decision to give Eddie Nketiah the number 14 shirt. The youngster put pen to paper and signed a fresh deal with the club last month after weeks of speculation that he might even leave.

But the new number he received has caused a stir – taking Theirry Henry’s famous 14 shirt. And O’Hara took exception to the decision.

Do you agree with O'Hara? Let us know in the comments section below

He said: "I can't believe he's getting number 14. I mean it just sums up really where Arsenal are right now. Spurs are buying all these great players, we're flying high, we've got Champions League football.

"And they're giving a player who didn't even want to be at the football club, all the fans said he wasn't good enough, he had decent end to the season, and they're giving him Thierry Henry's shirt. It's unbelievable. It's magic for us right now."

Then Woods blasted back at O’Hara for his words. She said on TalkSport: She said: “I do think in the wider context of this whole argument about Eddie taking the number 14 shirt, people are just forgetting it’s not like when Henry left Arsenal, it’s not like we retired the shirt. That didn’t happen.

"Other players took the shirt. I know what a lot of the fans are saying, I understand that. Thierry Henry, you’re never going to replace him. If you have that many problems with it, retire the shirt.

“Let’s be honest, no one can fill Thierry Henry’s boots, and if they can: incredible, wow, amazing. But it’s probably not going to happen, it’s Thierry Henry, it’s a once-in-a-lifetime footballer.

“My opinion of it really is Theo [Walcott] took the shirt and had it for ten years or something like that and I don’t know that there was this much uproar about that at the time. I think people got behind him.”