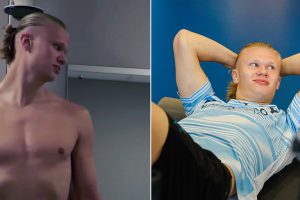 Erling Haaland learned during his Manchester City medical that he's still growing as he approaches his 22nd birthday and looks to take the Premier League by storm.

The Norway international striker has bagged a stunning return of 155 goals at club level from just 200 appearances in all competitions thanks not only to his finishing ability but also his pace, power and strength.

Taking part in his medical for City this week ahead of his £51.2million move from Bundesliga challengers Borussia Dortmund, Haaland was stunned to learn he had grown since his last check-up – by almost a centimetre.

After being measured by City's medical team to be 195.52cm tall, Haaland said: "Oh wow, I've grown… almost one centimetre."

Haaland's previous stats had him to be more than half a centimetre shorter at exactly 195cm, with the update taking him closer to 6ft 5in than 6ft 4in.

That update came after a former coach mentioned Haaland to be a late bloomer in terms of his height.

How many goals will Erling Haaland score in the Premier League next season? Give us your thoughts in the comments section below.

Speaking to Sky Sports during his time in Germany, Alf Ingve Berntsen, who coached Haaland at Bryne, mentioned that the forward had his first big growth spurt at the late age of 14.

"That is the good thing about growing late," Berntsen said.

"He had a longer period to develop those technical skills. It is why you should not always look at what a player is doing on the pitch but what they are trying to do.

"Sometimes, you see a player trying to do something good but their body is growing and does not respond."

Haaland is looking to continue his fine goalscoring return in the Premier League having joined his boyhood club – and cannot wait to work with Pep Guardiola.

He told the club: "I think I can get better on a lot of things, and hopefully I can score a lot of goals. Yes, I've spoken a little bit with him (Guardiola) and we both look forward to working together. I think it's a mix between a lot of things.

“I think first of all, it's my joy to play football, to try to enjoy every single moment and when I enjoy, I win football games and I score goals."